In his spare time Vladik estimates beauty of the flags.

Every flag could be represented as the matrix n × m which consists of positive integers.

Let's define the beauty of the flag as number of components in its matrix. We call component a set of cells with same numbers and between any pair of cells from that set there exists a path through adjacent cells from same component. Here is the example of the partitioning some flag matrix into components: 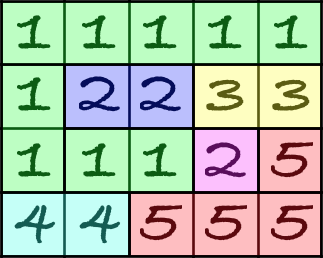 But this time he decided to change something in the process. Now he wants to estimate not the entire flag, but some segment. Segment of flag can be described as a submatrix of the flag matrix with opposite corners at (1, l) and (n, r), where conditions 1 ≤ l ≤ r ≤ m are satisfied.

Help Vladik to calculate the beauty for some segments of the given flag.

Each of next n lines contains m space-separated integers — description of flag matrix. All elements of flag matrix is positive integers not exceeding 106.

For each segment print the result on the corresponding line.

Partitioning on components for every segment from first test case: