Please subscribe to the official Codeforces channel in Telegram via the link https://t.me/codeforces_official. ×
→ Virtual participation
Virtual contest is a way to take part in past contest, as close as possible to participation on time. It is supported only ICPC mode for virtual contests. If you've seen these problems, a virtual contest is not for you - solve these problems in the archive. If you just want to solve some problem from a contest, a virtual contest is not for you - solve this problem in the archive. Never use someone else's code, read the tutorials or communicate with other person during a virtual contest.
→ Problem tags
brute force
interactive
*1900
No tag edit access
→ Contest materials
The problem statement has recently been changed. View the changes.
×

If you have ever interacted with a cat, you have probably noticed that they are quite particular about how to pet them. Here is an approximate map of a normal cat. 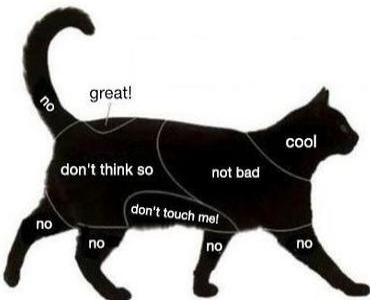 However, some cats won't tolerate this nonsense from the humans. Here is a map of a grumpy cat. 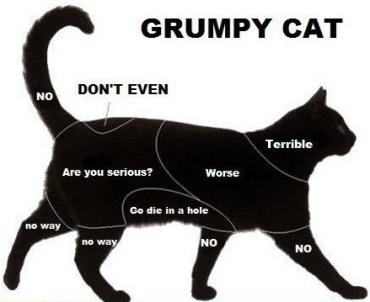 You have met a cat. Can you figure out whether it's normal or grumpy?

This is an interactive problem. Initially you're not given any information about the cat. Instead, the cat is divided into ten areas, indexed from 0 to 9.

In one query you can choose which area you'll pet and print the corresponding index to standard out. You will get the cat's response, as depicted on the corresponding map, via standard in. For simplicity all responses are written in lowercase.

Once you're certain what type of cat you're dealing with, output "normal" or "grumpy" to standard out.