→ Virtual participation
Virtual contest is a way to take part in past contest, as close as possible to participation on time. It is supported only ICPC mode for virtual contests. If you've seen these problems, a virtual contest is not for you - solve these problems in the archive. If you just want to solve some problem from a contest, a virtual contest is not for you - solve this problem in the archive. Never use someone else's code, read the tutorials or communicate with other person during a virtual contest.
→ Problem tags
constructive algorithms
graphs
*1800
No tag edit access
→ Contest materials
The problem statement has recently been changed. View the changes.
×
As the boat drifts down the river, a wood full of blossoms shows up on the riverfront.

"I've been here once," Mino exclaims with delight, "it's breathtakingly amazing."

"Look, Kanno, you've got your paintbrush, and I've got my words. Have a try, shall we?"

There are four kinds of flowers in the wood, Amaranths, Begonias, Centaureas and Dianthuses.

The wood can be represented by a rectangular grid of $$$n$$$ rows and $$$m$$$ columns. In each cell of the grid, there is exactly one type of flowers.

According to Mino, the numbers of connected components formed by each kind of flowers are $$$a$$$, $$$b$$$, $$$c$$$ and $$$d$$$ respectively. Two cells are considered in the same connected component if and only if a path exists between them that moves between cells sharing common edges and passes only through cells containing the same flowers.

Note that you can choose arbitrary $$$n$$$ and $$$m$$$ under the constraints below, they are not given in the input.

Then output $$$n$$$ lines each consisting of $$$m$$$ consecutive English letters, representing one row of the grid. Each letter should be among 'A', 'B', 'C' and 'D', representing Amaranths, Begonias, Centaureas and Dianthuses, respectively.

In case there are multiple solutions, print any. You can output each letter in either case (upper or lower).

In the first example, each cell of Amaranths, Begonias and Centaureas forms a connected component, while all the Dianthuses form one. 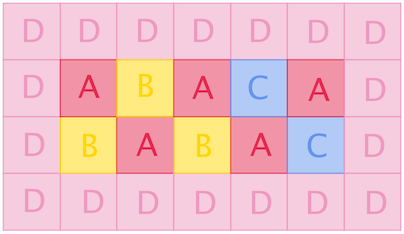