Polycarp is an introvert person. In fact he is so much of an introvert that he plays "Monsters and Potions" board game alone. The board of the game is a row of $$$n$$$ cells. The cells are numbered from $$$1$$$ to $$$n$$$ from left to right. There are three types of cells: a cell containing a single monster, a cell containing a single potion or a blank cell (it contains neither a monster nor a potion).

Polycarp has $$$m$$$ tokens representing heroes fighting monsters, which are initially located in the blank cells $$$s_1, s_2, \dots, s_m$$$. Polycarp's task is to choose a single cell (rally point) and one by one move all the heroes into this cell. A rally point can be a cell of any of three types.

After Policarp selects a rally point, he picks a hero and orders him to move directly to the point. Once that hero reaches the point, Polycarp picks another hero and orders him also to go to the point. And so forth, until all the heroes reach the rally point cell. While going to the point, a hero can not deviate from the direct route or take a step back. A hero just moves cell by cell in the direction of the point until he reaches it. It is possible that multiple heroes are simultaneously in the same cell.

If a hero steps into a cell which is blank (i.e. doesn't contain a monster/potion), hero's HP does not change.

If a hero steps into a cell containing a potion, then the hero drinks the potion immediately. As a result, potion's HP is added to hero's HP, the potion disappears, and the cell becomes blank.

Help Polycarp write a program to choose a rally point and the order in which heroes move.

On the first line of the output print the index of the rally point cell.

On the second line print $$$m$$$ integers — the order in which heroes should move to the rally point. Heroes are numbered from $$$1$$$ to $$$m$$$ in the order they are given in the input.

If it is impossible to find a rally point which can be reached by all heroes, print a single integer -1 in the output.

The picture illustrates the first example: 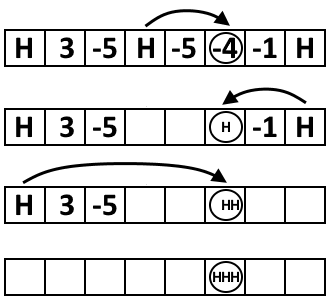