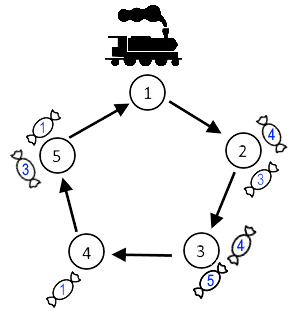 The blue numbers on the candies correspond to $$$b_i$$$ values. The image corresponds to the $$$1$$$-st example.

The train has infinite capacity, and it is possible to load off any number of candies at a station. However, only at most one candy can be loaded from a station onto the train before it leaves the station. You can choose any candy at this station. The time it takes to move the candies is negligible.

Now, Alice wonders how much time is needed for the train to deliver all candies. Your task is to find, for each station, the minimum time the train would need to deliver all the candies were it to start from there.

In the first and only line, print $$$n$$$ space-separated integers, the $$$i$$$-th of which is the minimum time, in seconds, the train would need to deliver all the candies were it to start from station $$$i$$$.

If the train started at station $$$1$$$, the optimal strategy is as follows.

Hence, the train needs $$$5$$$ seconds to complete the tasks.