Denis holds a Geometers Anonymous Club meeting in SIS. He has prepared $$$n$$$ convex polygons numbered from $$$1$$$ to $$$n$$$ for the club. He plans to offer members of the club to calculate Minkowski sums of these polygons. More precisely, he plans to give $$$q$$$ tasks, the $$$i$$$-th of them asks to calculate the sum of Minkowski of polygons with indices from $$$l_i$$$ to $$$r_i$$$ inclusive. 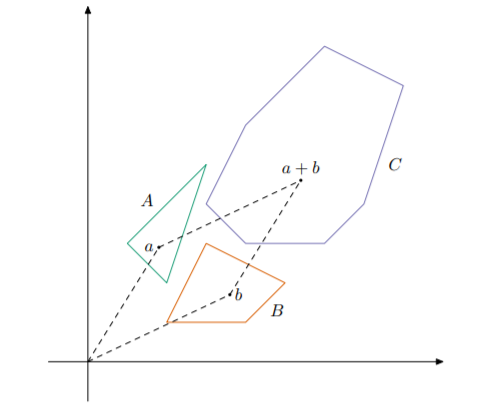 For the convenience of checking answers, Denis has decided to prepare and calculate the number of vertices in the sum of Minkowski for each task he prepared. Help him to do it.

It is guaranteed, that there are no three consecutive vertices lying on the same line. The total number of vertices over all polygons does not exceed $$$300\,000$$$.

For each task print a single integer — the number of vertices in the sum of Minkowski of polygons with indices from $$$l_i$$$ to $$$r_i$$$.

Description of the example:

First, second and third polygons from the example

Minkowski sums of the first and second, the second and third and all polygons correspondingly
User lists