All of us love treasures, right? That's why young Vasya is heading for a Treasure Island.

Evil Witch is aware of Vasya's journey and she is going to prevent him from reaching the treasure. Before Vasya's first move she is able to grow using her evil magic impassable forests in previously free cells. Witch is able to grow a forest in any number of any free cells except cells $$$(1, 1)$$$ where Vasya got off his ship and $$$(n, m)$$$ where the treasure is hidden.

Help Evil Witch by finding out the minimum number of cells she has to turn into impassable forests so that Vasya is no longer able to reach the treasure.

Print the only integer $$$k$$$, which is the minimum number of cells Evil Witch has to turn into impassable forest in order to prevent Vasya from reaching the treasure. 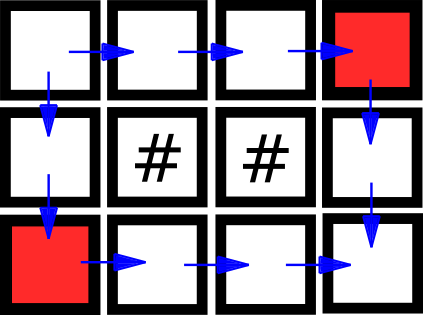