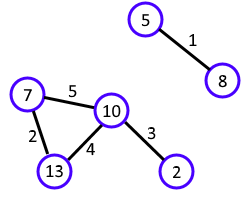 Currently the circuit board is broken. Polycarpus thinks that the board could be fixed if the wires were re-soldered so that a signal could pass between any pair of wires.

It takes $$$1$$$ minute for Polycarpus to re-solder an end of a wire. I.e. it takes one minute to change one of the two contact points for a wire. Any contact point from range $$$[1, 10^9]$$$ can be used as a new contact point. A wire's ends must always be soldered to distinct contact points. Both wire's ends can be re-solded, but that will require two actions and will take $$$2$$$ minutes in total.

Find the minimum amount of time Polycarpus needs to re-solder wires so that a signal can pass between any pair of wires. Also output an optimal sequence of wire re-soldering.

For each test case first print one line with a single integer $$$k$$$ — the minimum number of minutes needed to re-solder wires so that a signal can pass between any pair of wires. In the following $$$k$$$ lines print the description of re-solderings. Each re-soldering should be described by three integers $$$w_j, a_j, b_j$$$ ($$$1 \le w_j \le n$$$, $$$1 \le a_j, b_j \le 10^9$$$). Such triple means that during the $$$j$$$-th re-soldering an end of the $$$w_j$$$-th wire, which was soldered to contact point $$$a_j$$$, becomes soldered to contact point $$$b_j$$$ instead. After each re-soldering of a wire it must connect two distinct contact points. If there are multiple optimal re-solderings, print any of them.