Please subscribe to the official Codeforces channel in Telegram via the link https://t.me/codeforces_official. ×
→ Virtual participation
Virtual contest is a way to take part in past contest, as close as possible to participation on time. It is supported only ICPC mode for virtual contests. If you've seen these problems, a virtual contest is not for you - solve these problems in the archive. If you just want to solve some problem from a contest, a virtual contest is not for you - solve this problem in the archive. Never use someone else's code, read the tutorials or communicate with other person during a virtual contest.
→ Problem tags
brute force
data structures
implementation
*1500
No tag edit access
→ Contest materials
The problem statement has recently been changed. View the changes.
×

Bees Alice and Alesya gave beekeeper Polina famous card game "Set" as a Christmas present. The deck consists of cards that vary in four features across three options for each kind of feature: number of shapes, shape, shading, and color. In this game, some combinations of three cards are said to make up a set. For every feature — color, number, shape, and shading — the three cards must display that feature as either all the same, or pairwise different. The picture below shows how sets look. 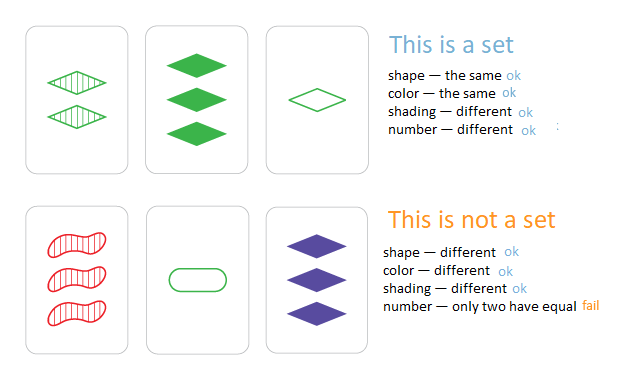 Similarly to the original game, three cards form a set, if all features are the same for all cards or are pairwise different. The goal of the game is to compute the number of ways to choose three cards that form a set.

Unfortunately, winter holidays have come to an end, and it's time for Polina to go to school. Help Polina find the number of sets among the cards lying on the table.

Output a single integer — the number of ways to choose three cards that form a set.

In the third example test, these two triples of cards are sets: