Perhaps today and/or tomorrow due to a power outage there may be disruptions in the work of Codeforces and Polygon. Please do not plan any important events during this time. If there are details or the exact time, we will definitely publish them. Estimated time of maintenance: from 2 Aug, 16:00 (UTC) to 2 Aug, 20:00 (UTC). ×
→ Virtual participation
Virtual contest is a way to take part in past contest, as close as possible to participation on time. It is supported only ICPC mode for virtual contests. If you've seen these problems, a virtual contest is not for you - solve these problems in the archive. If you just want to solve some problem from a contest, a virtual contest is not for you - solve this problem in the archive. Never use someone else's code, read the tutorials or communicate with other person during a virtual contest.
→ Problem tags
implementation
sortings
*1200
No tag edit access
→ Contest materials
The problem statement has recently been changed. View the changes.
×

Print the answer for each test case.

Otherwise, print "YES" in the first line. Then print the shortest path — a string consisting of characters 'R' and 'U'. Among all such paths choose the lexicographically smallest path.

For the first test case in the example the optimal path RUUURRRRUU is shown below: 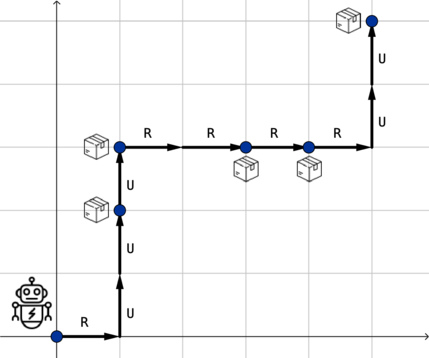