Nash designed an interesting yet simple board game where a player is simply required to follow instructions written on the cell where the player currently stands.

It is guaranteed that the characters are written in a way that the player will never have to step outside of the board, no matter at which cell he starts.

As a player starts from a cell, he moves according to the character in the current cell. The player keeps moving until he lands in a blocked zone. It is also possible that the player will keep moving infinitely long.

It might be possible that Alice is trying to fool you and there's no possible grid that satisfies all the constraints Alice gave you. For the given information Alice provided you, you are required to decipher a possible board, or to determine that such a board doesn't exist. If there exist several different boards that satisfy the provided information, you can find any of them.

If there doesn't exist a board satisfying the information that Alice gave you, print a single line containing INVALID.

The given grid in output is a valid one.

The simulation can be seen below : 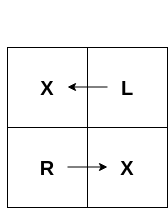 The given grid in output is a valid one, as a player starting at any cell other than the one at center $$$(2,2)$$$, keeps moving in an infinitely long cycle and never stops. Had he started at $$$(2,2)$$$, he wouldn't have moved further following instruction $$$X$$$ .

The simulation can be seen below : 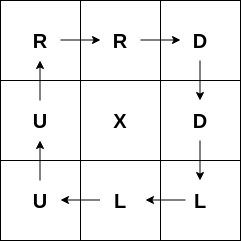