During the quarantine, Sicromoft has more free time to create the new functions in "Celex-2021". The developers made a new function GAZ-GIZ, which infinitely fills an infinite table to the right and down from the upper left corner as follows: 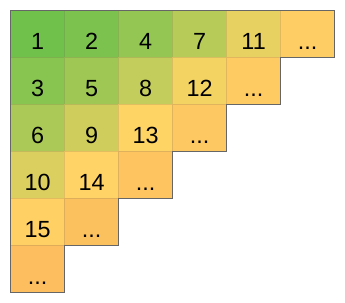 After another Dinwows update, Levian started to study "Celex-2021" (because he wants to be an accountant!). After filling in the table with the GAZ-GIZ function, he asked you to calculate the quantity of possible different amounts on the path from a given cell $$$(x_1, y_1)$$$ to another given cell $$$(x_2, y_2$$$), if you can only move one cell down or right.

Formally, consider all the paths from the cell $$$(x_1, y_1)$$$ to cell $$$(x_2, y_2)$$$ such that each next cell in the path is located either to the down or to the right of the previous one. Calculate the number of different sums of elements for all such paths.

For each test case, in a separate line, print the number of possible different sums on the way from the start cell to the end cell. 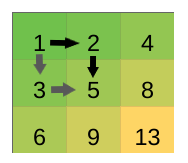