Polygon is not only the best platform for developing problems but also a square matrix with side $$$n$$$, initially filled with the character 0. 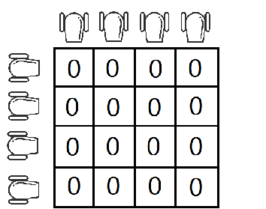 Cannons shoot character 1. At any moment of time, no more than one cannon is shooting. When a 1 flies out of a cannon, it flies forward (in the direction of the shot) until it collides with a polygon border or another 1. After that, it takes the cell in which it was before the collision and remains there. Take a look at the examples for better understanding.

For example, consider the following sequence of shots:

You have a report from the military training on your desk. This report is a square matrix with side length $$$n$$$ consisting of 0 and 1. You wonder if the training actually happened. In other words, is there a sequence of shots such that, after the training, you get the given matrix?

Each cannon can make an arbitrary number of shots. Before the training, each cell of the polygon contains 0.

For each test case print:

The letters in the words YES and NO can be printed in any case.

The first test case was explained in the statement.

The answer to the second test case is NO, since a 1 in a cell ($$$1, 1$$$) flying out of any cannon would continue its flight further.