Note that the only difference between the easy and hard version is the constraint on the number of queries. You can make hacks only if all versions of the problem are solved.

You are given a tree consisting of $$$n$$$ nodes numbered with integers from $$$1$$$ to $$$n$$$. Ayush and Ashish chose two secret distinct nodes in the tree. You need to find out both the nodes. You can make the following query:

Recall that a tree is a connected graph without cycles. The distance between two nodes is defined as the number of edges in the simple path between them.

To ask a query print a single line:

For each query, you will receive two integers $$$x$$$, $$$d$$$ — the node (among the queried nodes) with the minimum sum of distances to the hidden nodes and the sum of distances from that node to the hidden nodes. If the subset of nodes queried is invalid or you exceeded the number of queries then you will get $$$x = d = -1$$$. In this case, you should terminate the program immediately.

Guessing the hidden nodes does not count towards the number of queries asked.

The interactor is not adaptive. The hidden nodes do not change with queries.

Do not forget to read the string "Correct" / "Incorrect" after guessing the hidden nodes.

You need to solve each test case before receiving the input for the next test case.

The limit of $$$11$$$ queries applies to each test case and not to the entire input.

After printing a query do not forget to output the end of the line and flush the output. Otherwise, you will get Idleness limit exceeded. To do this, use:

To hack the solution, use the following test format: 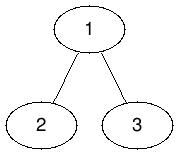