→ Attention
The package for this problem was not updated by the problem writer or Codeforces administration after we've upgraded the judging servers. To adjust the time limit constraint, a solution execution time will be multiplied by 2. For example, if your solution works for 400 ms on judging servers, then the value 800 ms will be displayed and used to determine the verdict.
→ Virtual participation
Virtual contest is a way to take part in past contest, as close as possible to participation on time. It is supported only ICPC mode for virtual contests. If you've seen these problems, a virtual contest is not for you - solve these problems in the archive. If you just want to solve some problem from a contest, a virtual contest is not for you - solve this problem in the archive. Never use someone else's code, read the tutorials or communicate with other person during a virtual contest.
→ Problem tags
brute force
math
*1000
No tag edit access
→ Contest materials
The problem statement has recently been changed. View the changes.
×

The box's lock looks as follows: it contains 4 identical deepenings for gems as a 2 × 2 square, and some integer numbers are written at the lock's edge near the deepenings. The example of a lock is given on the picture below. 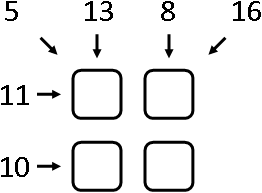 The box is accompanied with 9 gems. Their shapes match the deepenings' shapes and each gem contains one number from 1 to 9 (each number is written on exactly one gem). The box will only open after it is decorated with gems correctly: that is, each deepening in the lock should be filled with exactly one gem. Also, the sums of numbers in the square's rows, columns and two diagonals of the square should match the numbers written at the lock's edge. For example, the above lock will open if we fill the deepenings with gems with numbers as is shown on the picture below. 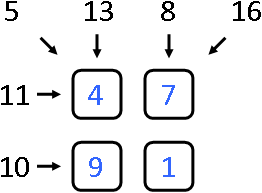 Now Vasilisa the Wise wants to define, given the numbers on the box's lock, which gems she should put in the deepenings to open the box. Help Vasilisa to solve this challenging task. 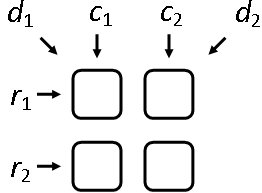 Print the scheme of decorating the box with stones: two lines containing two space-separated integers from 1 to 9. The numbers should be pairwise different. If there is no solution for the given lock, then print the single number "-1" (without the quotes).

If there are several solutions, output any.

Pay attention to the last test from the statement: it is impossible to open the box because for that Vasilisa the Wise would need 4 identical gems containing number "5". However, Vasilisa only has one gem with each number from 1 to 9.