The only difference between the two versions of the problem is that there are no updates in the easy version.

There are $$$n$$$ spools of thread placed on the rim of a circular table. The spools come in two types of thread: the first thread is black and the second thread is white.

For any two spools of the same color, you can attach them with a thread of that color in a straight line segment. Define a matching as a way to attach spools together so that each spool is attached to exactly one other spool.

Coloring is an assignment of colors (white and black) to the spools. A coloring is called valid if it has at least one matching. That is if the number of black spools and the number of white spools are both even. 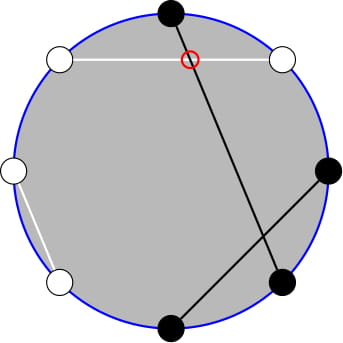 The circle above is described by the coloring bwbbbwww. After matching the spools as shown, there is one intersection between differently colored threads. It can be proven that it is the minimum possible, so $$$f(\text{bwbbbwww}) = 1$$$.

You are given a string $$$s$$$ representing an unfinished coloring, with black, white, and uncolored spools. A coloring $$$c$$$ is called $$$s$$$-reachable if you can achieve it by assigning colors to the uncolored spools of $$$s$$$ without changing the others.

It is guaranteed there exists at least one uncolored spool.

The first test corresponds closely to the image. Coloring '?' as 'w' does not create a valid coloring because the number of black spools is odd. Then the only reachable valid coloring is 'bwbbbwww' and $$$f(\text{bwbbbwww}) = 1$$$, so the expected value is $$$1$$$.