Baby Ehab wants to go play with Baby Badawy. He wants to know if he could get to him. However, he doesn't know anything about his apartment except the number of rooms. He can ask the baby sitter two types of questions:

After printing the answer, we will respond with a single integer. If it's $$$1$$$, you printed a correct answer and should keep solving the test cases (or exit if it is the last one). If it's $$$-1$$$, you printed a wrong answer and should terminate to get Wrong answer verdict. Otherwise, you can get an arbitrary verdict because your solution will continue to read from a closed stream.

To ask a question of the first type, use the format:

To ask a question of the second type, use the format:

If we answer with $$$-1$$$ instead of a valid answer, that means you exceeded the number of queries or made an invalid query. Exit immediately after receiving $$$-1$$$ and you will see Wrong answer verdict. Otherwise, you can get an arbitrary verdict because your solution will continue to read from a closed stream.

After printing a query, do not forget to output end of line and flush the output. Otherwise, you will get Idleness limit exceeded. To do this, use:

The first line should contain an integer $$$t$$$ — the number of test cases.

In the given example: 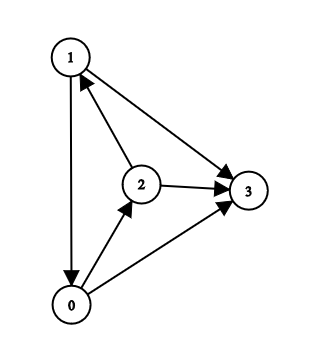 The first query asks whether there's a passage from room $$$3$$$ to any of the other rooms.

After a couple other queries, we concluded that you can go from any room to any other room except if you start at room $$$3$$$, and you can't get out of this room, so we printed the matrix:

The interactor answered with $$$1$$$, telling us the answer is correct.