An array of adjacent pairs of squares is called strong if it is possible to cut the grid along grid lines into two connected, congruent pieces so that each pair is part of the same piece. Two pieces are congruent if one can be matched with the other by translation, rotation, and reflection, or a combination of these. 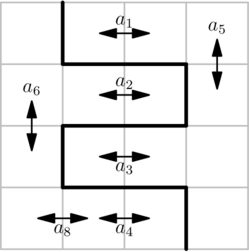 For each test case, output a single integer — the size of the largest strong subsequence of $$$a$$$.

In the second test case, we can take the subsequence consisting of the last four elements of $$$a$$$ and cut the square with a horizontal line through its center.