Anton came to a chocolate factory. There he found a working conveyor and decided to run on it from the beginning to the end. 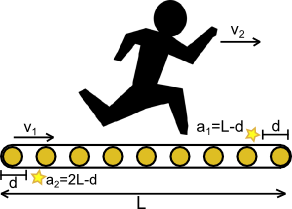 You are given the positions of the chocolates relative to the initial start position of the belt 0 ≤ a1 < a2 < ... < an < 2l. The positions on the belt from 0 to l correspond to the top, and from l to 2l — to the the bottom half of the belt (see example). All coordinates are given in meters.

Anton begins to run along the belt at a random moment of time. This means that all possible positions of the belt at the moment he starts running are equiprobable. For each i from 0 to n calculate the probability that Anton will pick up exactly i chocolates.

Print n + 1 numbers (one per line): the probabilities that Anton picks up exactly i chocolates, for each i from 0 (the first line) to n (the last line). The answer will be considered correct if each number will have absolute or relative error of at most than 10 - 9.

, and the probability of not picking it up equals