→ Attention
The package for this problem was not updated by the problem writer or Codeforces administration after we've upgraded the judging servers. To adjust the time limit constraint, a solution execution time will be multiplied by 2. For example, if your solution works for 400 ms on judging servers, then the value 800 ms will be displayed and used to determine the verdict.
→ Virtual participation
Virtual contest is a way to take part in past contest, as close as possible to participation on time. It is supported only ICPC mode for virtual contests. If you've seen these problems, a virtual contest is not for you - solve these problems in the archive. If you just want to solve some problem from a contest, a virtual contest is not for you - solve this problem in the archive. Never use someone else's code, read the tutorials or communicate with other person during a virtual contest.
→ Problem tags
data structures
*3000
No tag edit access
→ Contest materials
The problem statement has recently been changed. View the changes.
×

The polar bears have discovered a gigantic circular piece of floating ice with some mystic carvings on it. There are n lines carved on the ice. Each line connects two points on the boundary of the ice (we call these points endpoints). The endpoints are numbered 1, 2, ..., 2n counter-clockwise along the circumference. No two lines share an endpoint.

Now a group of 6 polar bears (Alice, Bob, Carol, Dave, Eve, Frank) are going to build caves on the endpoints. Each polar bear would build a cave and live in it. No two polar bears can build a cave on the same endpoints. Alice and Bob is a pair of superstitious lovers. They believe the lines are carved by aliens (or humans, which are pretty much the same thing to polar bears), and have certain spiritual power. Therefore they want to build their caves on two endpoints which are connected by a line. The same for Carol and Dave, Eve and Frank.

The distance between two caves X and Y is defined as one plus minimum number of other caves one need to pass through in order to travel from X to Y along the boundary of the ice (endpoints without caves are not counted). 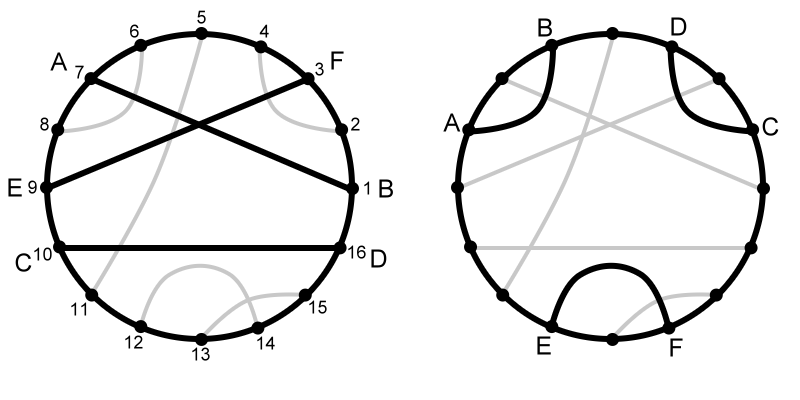 Count the number of ways to build the caves under the requirements. Two configurations are considered the same if the same set of 6 endpoints are used.

Each of the following n lines contains two integers ai, bi (1 ≤ ai, bi ≤ 2n), which means that there is a line carved on the ice connecting the ai–th and bi–th endpoint.

It's guaranteed that each endpoints touches exactly one line.

Print the number of ways to build the caves.

The second sample corresponds to the figure in the problem statement.