→ Attention
The package for this problem was not updated by the problem writer or Codeforces administration after we've upgraded the judging servers. To adjust the time limit constraint, a solution execution time will be multiplied by 2. For example, if your solution works for 400 ms on judging servers, then the value 800 ms will be displayed and used to determine the verdict.
→ Virtual participation
Virtual contest is a way to take part in past contest, as close as possible to participation on time. It is supported only ICPC mode for virtual contests. If you've seen these problems, a virtual contest is not for you - solve these problems in the archive. If you just want to solve some problem from a contest, a virtual contest is not for you - solve this problem in the archive. Never use someone else's code, read the tutorials or communicate with other person during a virtual contest.
→ Problem tags
dfs and similar
shortest paths
*1500
No tag edit access
→ Contest materials
The problem statement has recently been changed. View the changes.
×

You're a mikemon breeder currently in the middle of your journey to become a mikemon master. Your current obstacle is go through the infamous Biridian Forest.

The Biridian Forest is a two-dimensional grid consisting of r rows and c columns. Each cell in Biridian Forest may contain a tree, or may be vacant. A vacant cell may be occupied by zero or more mikemon breeders (there may also be breeders other than you in the forest). Mikemon breeders (including you) cannot enter cells with trees. One of the cells is designated as the exit cell. 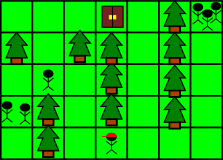 Breeders (including you) may move in the forest. In a single move, breeders may perform one of the following actions:

Note that the moment you leave the forest, no more mikemon battles can ensue, even if another mikemon breeder move to the exit cell immediately after that. Also note that a battle only happens between you and another breeders — there will be no battle between two other breeders (there may be multiple breeders coexisting in a single cell).

Goal of other breeders

Because you post the sequence in your Blog, the other breeders will all know your exact sequence of moves even before you make your first move. All of them will move in such way that will guarantee a mikemon battle with you, if possible. The breeders that couldn't battle you will do nothing.

Print the minimum number of mikemon battles that you must participate in, assuming that you pick the sequence of moves that minimize this number. Note that you are not required to minimize the number of moves you make.

The first line consists of two integers: r and c (1 ≤ r, c ≤ 1000), denoting the number of rows and the number of columns in Biridian Forest. The next r rows will each depict a row of the map, where each character represents the content of a single cell:

It is guaranteed that it will be possible for you to go from your starting position to the exit cell through a sequence of moves.

A single line denoted the minimum possible number of mikemon battles that you have to participate in if you pick a strategy that minimize this number.

The following picture illustrates the first example. The blue line denotes a possible sequence of moves that you should post in your blog: 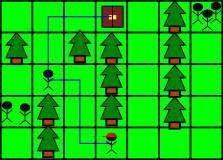 For the second example, you should post this sequence in your Blog:

Here's what happens. First, you move one cell to the right.

Then, the two breeders directly to the right of the exit will simultaneously move to the left. The other three breeder cannot battle you so they will do nothing.

You end up in the same cell with 2 breeders, so 2 mikemon battles are conducted. After those battles, all of your opponents leave the forest.

Finally, you make another move by leaving the forest.