→ Attention
The package for this problem was not updated by the problem writer or Codeforces administration after we've upgraded the judging servers. To adjust the time limit constraint, a solution execution time will be multiplied by 2. For example, if your solution works for 400 ms on judging servers, then the value 800 ms will be displayed and used to determine the verdict.
→ Virtual participation
Virtual contest is a way to take part in past contest, as close as possible to participation on time. It is supported only ICPC mode for virtual contests. If you've seen these problems, a virtual contest is not for you - solve these problems in the archive. If you just want to solve some problem from a contest, a virtual contest is not for you - solve this problem in the archive. Never use someone else's code, read the tutorials or communicate with other person during a virtual contest.
→ Problem tags
dp
math
probabilities
*2800
No tag edit access
→ Contest materials
The problem statement has recently been changed. View the changes.
×

Alice and Bob decide to count the number of skyscrapers.

Alice is thorough, and wants to know exactly how many skyscrapers there are. She begins at the leftmost skyscraper, with a counter at 1. She then moves to the right, one skyscraper at a time, adding 1 to her counter each time she moves. She continues until she reaches the rightmost skyscraper.

Bob is impatient, and wants to finish as fast as possible. He begins at the leftmost skyscraper, with a counter at 1. He moves from building to building using zip lines. At each stage Bob uses the highest available zip line to the right, but ignores floors with a height greater than h due to fear of heights. When Bob uses a zip line, he travels too fast to count how many skyscrapers he passed. Instead, he just adds 2i to his counter, where i is the number of the floor he's currently on. He continues until he reaches the rightmost skyscraper. 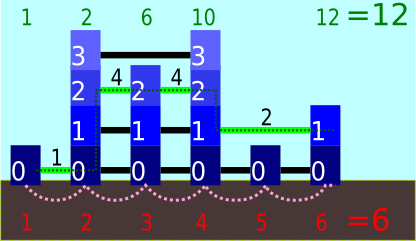 Bob's counter is at the top of the image, and Alice's counter at the bottom. All zip lines are shown. Bob's path is shown by the green dashed line and Alice's by the pink dashed line. The floors of the skyscrapers are numbered, and the zip lines Bob uses are marked with the amount he adds to his counter.

When Alice and Bob reach the right-most skyscraper, they compare counters. You will be given either the value of Alice's counter or the value of Bob's counter, and must compute the expected value of the other's counter.

You answer will be considered correct if its absolute or relative error doesn't exceed 10 - 9.