→ Attention
The package for this problem was not updated by the problem writer or Codeforces administration after we've upgraded the judging servers. To adjust the time limit constraint, a solution execution time will be multiplied by 2. For example, if your solution works for 400 ms on judging servers, then the value 800 ms will be displayed and used to determine the verdict.
→ Virtual participation
Virtual contest is a way to take part in past contest, as close as possible to participation on time. It is supported only ICPC mode for virtual contests. If you've seen these problems, a virtual contest is not for you - solve these problems in the archive. If you just want to solve some problem from a contest, a virtual contest is not for you - solve this problem in the archive. Never use someone else's code, read the tutorials or communicate with other person during a virtual contest.
→ Problem tags
dp
graphs
shortest paths
*2600
No tag edit access
→ Contest materials
The problem statement has recently been changed. View the changes.
×

The boss of the Company of Robot is a cruel man. His motto is "Move forward Or Die!". And that is exactly what his company's product do. Look at the behavior of the company's robot when it is walking in the directed graph. This behavior has been called "Three Laws of Robotics":

Can you imagine a robot behaving like that? That's why they are sold at a very low price, just for those who are short of money, including mzry1992, of course. mzry1992 has such a robot, and she wants to move it from vertex s to vertex t in a directed graph safely without self-destruction. Luckily, she can send her robot special orders at each vertex. A special order shows the robot which way to move, if it has multiple ways to move (to prevent random moving of the robot according to Law 3). When the robot reaches vertex t, mzry1992 takes it off the graph immediately. So you can see that, as long as there exists a path from s to t, she can always find a way to reach the goal (whatever the vertex t has the outdegree of zero or not). 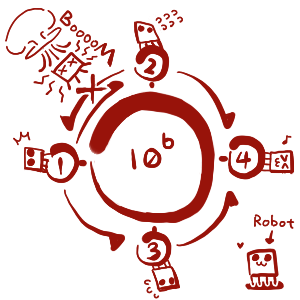 However, sending orders is expensive, so your task is to find the minimum number of orders mzry1992 needs to send in the worst case. Please note that mzry1992 can give orders to the robot while it is walking on the graph. Look at the first sample to clarify that part of the problem.

It is guaranteed that there are no multiple edges and self-loops.

If there is a way to reach a goal, print the required minimum number of orders in the worst case. Otherwise, print -1.