Berlanders like to eat cones after a hard day. Misha Square and Sasha Circle are local authorities of Berland. Each of them controls its points of cone trade. Misha has n points, Sasha — m. Since their subordinates constantly had conflicts with each other, they decided to build a fence in the form of a circle, so that the points of trade of one businessman are strictly inside a circle, and points of the other one are strictly outside. It doesn't matter which of the two gentlemen will have his trade points inside the circle.

Determine whether they can build a fence or not.

It is guaranteed that all n + m points are distinct.

The only output line should contain either word "YES" without quotes in case it is possible to build a such fence or word "NO" in the other case. 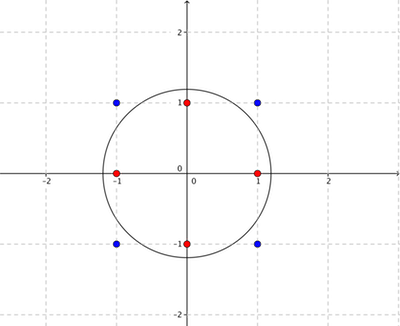