→ Attention
Package for this problem was not updated by the problem writer or Codeforces administration after we’ve upgraded the judging servers. To adjust the time limit constraint, solution execution time will be multiplied by 2. For example, if your solution works for 400 ms on judging servers, then value 800 ms will be displayed and used to determine the verdict.
→ Virtual participation
Virtual contest is a way to take part in past contest, as close as possible to participation on time. It is supported only ICPC mode for virtual contests. If you've seen these problems, a virtual contest is not for you - solve these problems in the archive. If you just want to solve some problem from a contest, a virtual contest is not for you - solve this problem in the archive. Never use someone else's code, read the tutorials or communicate with other person during a virtual contest.
→ Problem tags
dp
flows
*2700
No tag edit access
→ Contest materials
The problem statement has recently been changed. View the changes.
×

As a result of Pinky and Brain's mysterious experiments in the Large Hadron Collider some portals or black holes opened to the parallel dimension. And the World Evil has crept to the veil between their world and ours. Brain quickly evaluated the situation and he understood that the more evil tentacles creep out and become free, the higher is the possibility that Brain will rule the world.

The collider's constriction is a rectangular grid rolled into a cylinder and consisting of n rows and m columns such as is shown in the picture below: 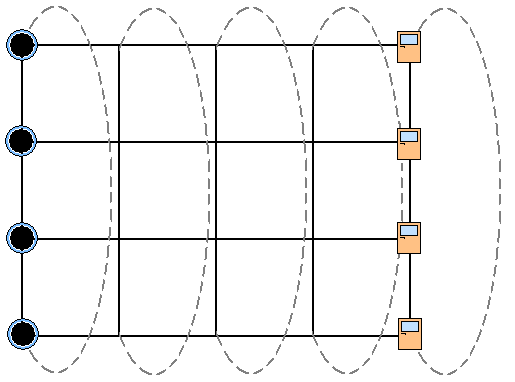 In the leftmost column of the grid the portals are situated and the tentacles of the World Evil are ready to creep out from there. In the rightmost column the exit doors are located. The tentacles can only get out through those doors. The segments joining the nodes of the grid are corridors.

Brain would be glad to let all the tentacles out but he faces a problem: the infinite number of tentacles can creep out of the portals, every tentacle possesses infinite length and some width and the volume of the corridors are, unfortunately, quite limited. Brain could approximately evaluate the maximal number of tentacles that will be able to crawl through every corridor.

Now help the mice to determine the maximal number of tentacles of the World Evil that will crawl out of the Large Hadron Collider.

Print a single number, the number of the World Evil tentacles Pinky and Brain will command.

Please, do not use %lld specificator to read or write 64-bit integers in C++. It is preffered to use cout (also you may use %I64d).