→ Attention
Package for this problem was not updated by the problem writer or Codeforces administration after we’ve upgraded the judging servers. To adjust the time limit constraint, solution execution time will be multiplied by 2. For example, if your solution works for 400 ms on judging servers, then value 800 ms will be displayed and used to determine the verdict.
→ Virtual participation
Virtual contest is a way to take part in past contest, as close as possible to participation on time. It is supported only ICPC mode for virtual contests. If you've seen these problems, a virtual contest is not for you - solve these problems in the archive. If you just want to solve some problem from a contest, a virtual contest is not for you - solve this problem in the archive. Never use someone else's code, read the tutorials or communicate with other person during a virtual contest.
→ Problem tags
geometry
*2500
No tag edit access
→ Contest materials
The problem statement has recently been changed. View the changes.
×

In the town of Aalam-Aara (meaning the Light of the Earth), previously there was no crime, no criminals but as the time progressed, sins started creeping into the hearts of once righteous people. Seeking solution to the problem, some of the elders found that as long as the corrupted part of population was kept away from the uncorrupted part, the crimes could be stopped. So, they are trying to set up a compound where they can keep the corrupted people. To ensure that the criminals don't escape the compound, a watchtower needs to be set up, so that they can be watched.

Since the people of Aalam-Aara aren't very rich, they met up with a merchant from some rich town who agreed to sell them a land-plot which has already a straight line fence AB along which a few points are set up where they can put up a watchtower. Your task is to help them find out the number of points on that fence where the tower can be put up, so that all the criminals can be watched from there. Only one watchtower can be set up. A criminal is watchable from the watchtower if the line of visibility from the watchtower to him doesn't cross the plot-edges at any point between him and the tower i.e. as shown in figure 1 below, points X, Y, C and A are visible from point B but the points E and D are not. 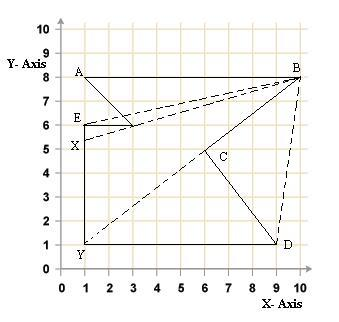 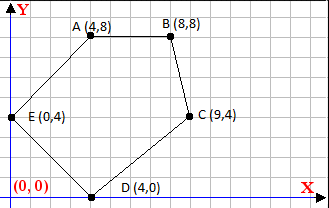 Assume that the land plot is in the shape of a polygon and coordinate axes have been setup such that the fence AB is parallel to x-axis and the points where the watchtower can be set up are the integer points on the line. For example, in given figure 2, watchtower can be setup on any of five integer points on AB i.e. (4, 8), (5, 8), (6, 8), (7, 8) or (8, 8). You can assume that no three consecutive points are collinear and all the corner points other than A and B, lie towards same side of fence AB. The given polygon doesn't contain self-intersections.

Next n lines will contain the coordinates of the vertices in the clockwise order of the polygon. On the i-th line are integers xi and yi (0 ≤ xi, yi ≤ 106) separated by a space.

Output consists of a single line containing the number of points where the watchtower can be set up.

Figure 2 shows the first test case. All the points in the figure are watchable from any point on fence AB. Since, AB has 5 integer coordinates, so answer is 5.

For case two, fence CD and DE are not completely visible, thus answer is 0.