You are given an undirected graph consisting of $$$n$$$ vertices and $$$m$$$ edges. Your task is to find the number of connected components which are cycles.

Here are some definitions of graph theory.

A connected component is a cycle if and only if its vertices can be reordered in such a way that:

A cycle doesn't contain any other edges except described above. By definition any cycle contains three or more vertices. 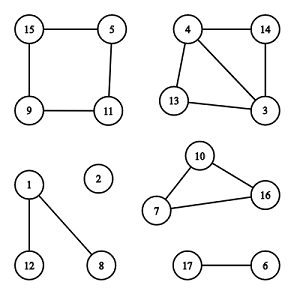 Print one integer — the number of connected components which are also cycles.

The illustration above corresponds to the second example.