"Flowing and passing like this, the water isn't gone ultimately; Waxing and waning like that, the moon doesn't shrink or grow eventually."

"Everything is transient in a way and perennial in another."

Kanno doesn't seem to make much sense out of Mino's isolated words, but maybe it's time that they enjoy the gentle breeze and the night sky — the inexhaustible gifts from nature.

Gazing into the sky of stars, Kanno indulges in a night's tranquil dreams.

Kanno starts from a point $$$P$$$ that can be chosen on the plane. $$$P$$$ is not added to $$$S$$$ if it doesn't belong to $$$S$$$. Then the following sequence of operations (altogether called a move) is repeated several times, in the given order:

Your answer will be considered correct if each number in your output differs from the corresponding one in jury's answer by at most $$$10^{-6}$$$.

The points in $$$S$$$ and possible candidates for line $$$l$$$ are depicted in the following figure. 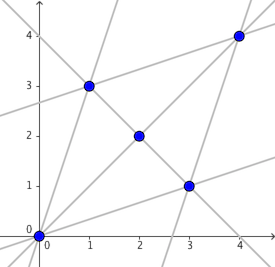