Please subscribe to the official Codeforces channel in Telegram via the link https://t.me/codeforces_official. ×
→ Problem tags
No tags yet
No tag edit access
The problem statement has recently been changed. View the changes.
×

Not so long ago, an International Cell Playing Company (ICPC) decided to organize an Amusing Championship of Minesweeper (ACM). "Minesweeper" is a standard Windows game (you can find it now at Start->Programs->Games->Minesweeper or somewhere like this). The rules of "Minesweeper" are the following: you are to open all the cells of a game field, that don't contain mines, and to mark by flags all the cells, that contain mines. During the game, numbers which are written in the cells help you to solve this task. These numbers appear in the opened cells (it is denied to open a cell with a mine, in this case you will be exploded). A number written in a cell indicates how many mines are situated in 8 neighboring cells (fig.1). 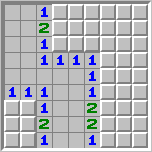 
Just for aesthetic reasons "0" is indicated in background color, so you don't see it. In the case of absence of any mines in the cells neighboring with some opened cell, all neighboring cells will be opened automatically (you can see it on the first figure, where only 1 cell was opened by player, and other cells were opened automatically).
Now we can immediately say where the mines are certainly situated (fig. 2). 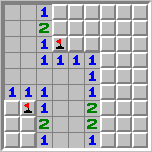 
Very often a following situation takes place. No cell of the first column is opened, while all the cells of second column are opened, and it is guaranteed that second and third columns don't contain mines at all (fig. 3). 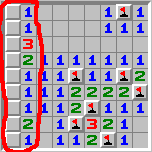 
So you can be sure, that all 3 neighboring cells of the first column contain mines. Therefore it is not difficult to find out, which cells are free of mines (fig. 5).


Now, using this information, we can say all about the first column (the remaining cells definitely contain mines). Sometimes it can be impossible to determine surely, where the mines are situated, and where not (fig. 6).


Sometimes the field may be mistaken at all, and there exists no mine distribution that produces such numbers in the second column (fig. 3, pay attention to the upper part of the column). It is not very amazing when you remember who has written this game.
Now you must write a program which, given the data of the second column, outputs how many distributions of the mines in the first column exist, that produce such data in the second column.
Input
The first line of input contains integer N - height of the field (1<=N<=1000). Then N lines follow, each containing an integer ai (0<=ai<=3) - the number, written on the I-th cell of the second column.
Output
You must output the only number - an answer to the problem.
Sample test(s)
Input
Test #1
9
1 1 3 2 1 1 1 2 1