For most people Halloween evening is a time of having fun. But Mr. X chose the night after Halloween to commit a crime. He wants to get some boards to build a shed. And he decided to stole it from the fence of the neighbouring factory. But he wants to do it in such a way that nobody will notice boards loss. The fence consists of several boards with width, equal to 1, and integer heights (see picture). Mr. X is going to take some boards from the fence and then put the remaining boards together without changing their order to form a new fence. To be sure that noboby will notice the change, the perimeter of resulting fence should not be less than a half of the perimeter of initial fence. See picure description to understand the way of calculating fence's perimeter. With such constraint, Mr. X wants to maximize total height of extracted boards. 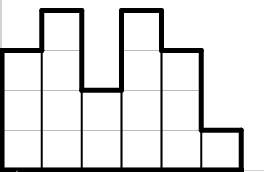 
Output
In the first line output s — maximal total height of some subset of the boards, which can be taken without violating the described rule. In the second line output k — number of boards in such subset. In the third line output k numbers of the boards which should be stolen. Boards are numbered starting from 1 as they appear in the input. Print numbers in any order. If there are multiple solutions, output any.