→ Attention
The package for this problem was not updated by the problem writer or Codeforces administration after we've upgraded the judging servers. To adjust the time limit constraint, a solution execution time will be multiplied by 2. For example, if your solution works for 400 ms on judging servers, then the value 800 ms will be displayed and used to determine the verdict.
→ Virtual participation
Virtual contest is a way to take part in past contest, as close as possible to participation on time. It is supported only ICPC mode for virtual contests. If you've seen these problems, a virtual contest is not for you - solve these problems in the archive. If you just want to solve some problem from a contest, a virtual contest is not for you - solve this problem in the archive. Never use someone else's code, read the tutorials or communicate with other person during a virtual contest.
→ Problem tags
constructive algorithms
greedy
implementation
*1800
No tag edit access
→ Contest materials
The problem statement has recently been changed. View the changes.
×

Once upon a time in the Kingdom of Far Far Away lived Sir Lancelot, the chief Royal General. He was very proud of his men and he liked to invite the King to come and watch drill exercises which demonstrated the fighting techniques and tactics of the squad he was in charge of. But time went by and one day Sir Lancelot had a major argument with the Fairy Godmother (there were rumors that the argument occurred after the general spoke badly of the Godmother's flying techniques. That seemed to hurt the Fairy Godmother very deeply).

As the result of the argument, the Godmother put a rather strange curse upon the general. It sounded all complicated and quite harmless: "If the squared distance between some two soldiers equals to 5, then those soldiers will conflict with each other!"

Your task is to help the general. You are given the size of the drill exercise field. You are asked to calculate the maximum number of soldiers that can be simultaneously positioned on this field, so that no two soldiers fall under the Fairy Godmother's curse.

The single line contains space-separated integers n and m (1 ≤ n, m ≤ 1000) that represent the size of the drill exercise field.

In the first sample test Sir Lancelot can place his 4 soldiers on the 2 × 4 court as follows (the soldiers' locations are marked with gray circles on the scheme):

In the second sample test he can place 6 soldiers on the 3 × 4 site in the following manner: 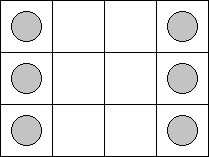