→ Attention
The package for this problem was not updated by the problem writer or Codeforces administration after we've upgraded the judging servers. To adjust the time limit constraint, a solution execution time will be multiplied by 2. For example, if your solution works for 400 ms on judging servers, then the value 800 ms will be displayed and used to determine the verdict.
→ Virtual participation
Virtual contest is a way to take part in past contest, as close as possible to participation on time. It is supported only ICPC mode for virtual contests. If you've seen these problems, a virtual contest is not for you - solve these problems in the archive. If you just want to solve some problem from a contest, a virtual contest is not for you - solve this problem in the archive. Never use someone else's code, read the tutorials or communicate with other person during a virtual contest.
→ Problem tags
data structures
greedy
*2200
No tag edit access
→ Contest materials
The problem statement has recently been changed. View the changes.
× 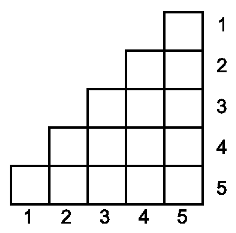 The squares of the n-degree staircase contain m sportsmen.

A sportsman needs one second to move to a side-neighboring square of the staircase. Before the beginning of the competition each sportsman must choose one of the shortest ways to the secondary diagonal.

You are given positions of m sportsmen on the staircase. Your task is to choose among them the maximum number of sportsmen for who the competition can be successful, that is, so that there existed such choice of shortest ways for the sportsmen at which no two sportsmen find themselves in the same square simultaneously. All other sportsmen that are not chosen will be removed from the staircase before the competition starts.

A note to the first sample. 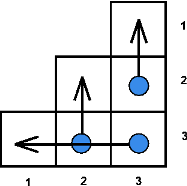 The picture shows a three-degree staircase. The arrows show the shortest paths that the sportsmen choose.
User lists