→ Attention
The package for this problem was not updated by the problem writer or Codeforces administration after we've upgraded the judging servers. To adjust the time limit constraint, a solution execution time will be multiplied by 2. For example, if your solution works for 400 ms on judging servers, then the value 800 ms will be displayed and used to determine the verdict.
→ Virtual participation
Virtual contest is a way to take part in past contest, as close as possible to participation on time. It is supported only ICPC mode for virtual contests. If you've seen these problems, a virtual contest is not for you - solve these problems in the archive. If you just want to solve some problem from a contest, a virtual contest is not for you - solve this problem in the archive. Never use someone else's code, read the tutorials or communicate with other person during a virtual contest.
→ Problem tags
geometry
*3000
No tag edit access
→ Contest materials
The problem statement has recently been changed. View the changes.
×

The first ship with the Earth settlers landed on Mars. The colonists managed to build n necessary structures on the surface of the planet (which can be regarded as a plane, and the construction can be regarded as points on it). But one day the scanners recorded suspicious activity on the outskirts of the colony. It was decided to use the protective force field generating system to protect the colony against possible trouble.

The system works as follows: the surface contains a number of generators of the field (they can also be considered as points). The active range of each generator is a circle of radius r centered at the location of the generator (the boundary of the circle is also included in the range). After the system is activated, it stretches the protective force field only over the part of the surface, which is within the area of all generators' activity. That is, the protected part is the intersection of the generators' active ranges.

The number of generators available to the colonists is not limited, but the system of field generation consumes a lot of energy. More precisely, the energy consumption does not depend on the number of generators, but it is directly proportional to the area, which is protected by the field. Also, it is necessary that all the existing buildings are located within the protected area.

Determine the smallest possible area of the protected part of the surface containing all the buildings.

It is guaranteed that there exists a circle with radius r that contains all the buildings.

Print the single real number — the minimum area of the protected part containing all the buildings. The answer is accepted if absolute or relative error doesn't exceed 10 - 4.

In the first sample the given radius equals the radius of the circle circumscribed around the given points. That's why the circle that corresponds to it is the sought area. The answer is 25π.

In the second sample the area nearly coincides with the square which has vertexes in the given points.

The area for the third sample is shown on the picture below. 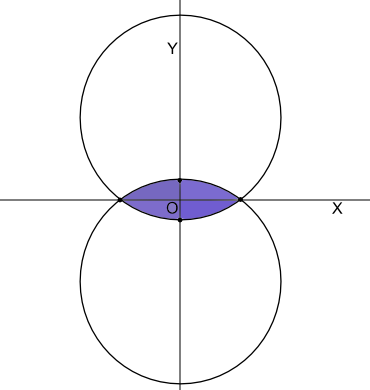