→ Attention
Package for this problem was not updated by the problem writer or Codeforces administration after we’ve upgraded the judging servers. To adjust the time limit constraint, solution execution time will be multiplied by 2. For example, if your solution works for 400 ms on judging servers, then value 800 ms will be displayed and used to determine the verdict.
→ Virtual participation
Virtual contest is a way to take part in past contest, as close as possible to participation on time. It is supported only ICPC mode for virtual contests. If you've seen these problems, a virtual contest is not for you - solve these problems in the archive. If you just want to solve some problem from a contest, a virtual contest is not for you - solve this problem in the archive. Never use someone else's code, read the tutorials or communicate with other person during a virtual contest.
→ Problem tags
*1600
No tag edit access
→ Contest materials

In ABBYY a wonderful Smart Beaver lives. This time, he began to study history. When he read about the Roman Empire, he became interested in the life of merchants.

We know that there existed a path between any two cities in the Roman Empire.

The tax collection day came in the Empire. The Smart Beaver from ABBYY is very curious by nature, so he decided to count how many dinars each merchant had paid that day. And now he needs your help.

The following m lines contain pairs of integers a i, b i (1 ≤ a i, b i ≤ n, a i ≠ b i), separated by a space — the numbers of cities connected by the i-th road. It is guaranteed that any two cities are connected by no more than one road and that there exists a path between any two cities in the Roman Empire.

The next line contains a single integer k — the number of merchants in the empire.

The input limitations for getting 20 points are:

The input limitations for getting 50 points are:

Print exactly k lines, the i-th line should contain a single integer d i — the number of dinars that the i-th merchant paid.

The given sample is illustrated in the figure below. 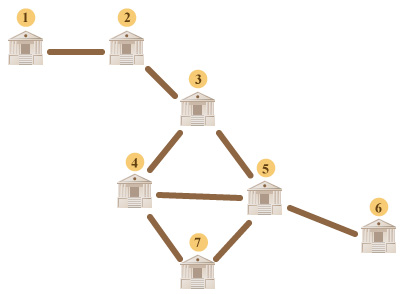 Let's describe the result for the first merchant. The merchant's warehouse is located in city 1 and his shop is in city 5. Let us note that if either road, (1, 2) or (2, 3) is destroyed, there won't be any path between cities 1 and 5 anymore. If any other road is destroyed, the path will be preserved. That's why for the given merchant the answer is 2.