→ Attention
The package for this problem was not updated by the problem writer or Codeforces administration after we've upgraded the judging servers. To adjust the time limit constraint, a solution execution time will be multiplied by 2. For example, if your solution works for 400 ms on judging servers, then the value 800 ms will be displayed and used to determine the verdict.
→ Virtual participation
Virtual contest is a way to take part in past contest, as close as possible to participation on time. It is supported only ICPC mode for virtual contests. If you've seen these problems, a virtual contest is not for you - solve these problems in the archive. If you just want to solve some problem from a contest, a virtual contest is not for you - solve this problem in the archive. Never use someone else's code, read the tutorials or communicate with other person during a virtual contest.
→ Problem tags
math
*2600
No tag edit access
→ Contest materials
The problem statement has recently been changed. View the changes.
×

A Russian space traveller Alisa Selezneva, like any other schoolgirl of the late 21 century, is interested in science. She has recently visited the MIT (Moscow Institute of Time), where its chairman and the co-inventor of the time machine academician Petrov told her about the construction of a time machine.

During the demonstration of the time machine performance Alisa noticed that the machine does not have high speed and the girl got interested in the reason for such disadvantage. As it turns out on closer examination, one of the problems that should be solved for the time machine isn't solved by an optimal algorithm. If you find a way to solve this problem optimally, the time machine will run faster and use less energy.

A task that none of the staff can solve optimally is as follows. There exists a matrix a, which is filled by the following rule:

So, after the first 36 numbers are inserted, matrix a will look as follows: 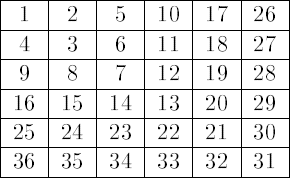 As the meaning of this expression can be large enough, it is sufficient to know only the last 10 digits of the sought value.

So, no one in MTI can solve the given task. Alice was brave enough to use the time machine and travel the past to help you.

Your task is to write a program that uses the given values x1, y1, x2 and y2 finds the last 10 digits of the given expression.

The first input line contains a single integer t (1 ≤ t ≤ 105) — the number of test sets for which you should solve the problem.

For each query print the meaning of the expression if it contains at most 10 characters. Otherwise, print three characters "." (without the quotes), and then ten last digits of the time expression. Print the answer to each query on a single line. Follow the format, given in the sample as closely as possible.