Recently Duff has been a soldier in the army. Malek is her commander.

Their country, Andarz Gu has n cities (numbered from 1 to n) and n - 1 bidirectional roads. Each road connects two different cities. There exist a unique path between any two cities.

Malek loves to order. That's why he asks Duff to answer to q queries. In each query, he gives her numbers v, u and a.

To answer a query:

Assume there are x people living in the cities lying on the path from city v to city u. Assume these people's IDs are p1, p2, ..., px in increasing order.

Duff is very busy at the moment, so she asked you to help her and answer the queries.

Graph of Andarz Gu in the sample case is as follows (ID of people in each city are written next to them): 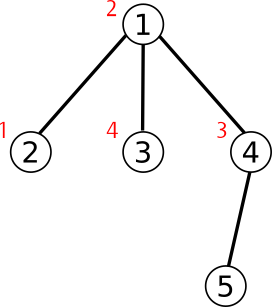