Recently Polycarp started to develop a text editor that works only with correct bracket sequences (abbreviated as CBS).

There are pictures illustrated several usages of operation "D" below. 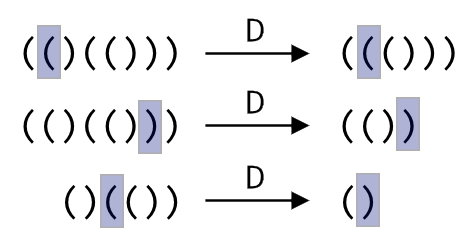 All incorrect operations (shift cursor over the end of CBS, delete the whole CBS, etc.) are not supported by Polycarp's editor.

Polycarp is very proud of his development, can you implement the functionality of his editor?

The first line contains three positive integers n, m and p (2 ≤ n ≤ 500 000, 1 ≤ m ≤ 500 000, 1 ≤ p ≤ n) — the number of brackets in the correct bracket sequence, the number of operations and the initial position of cursor. Positions in the sequence are numbered from left to right, starting from one. It is guaranteed that n is even.

It is followed by the string of n characters "(" and ")" forming the correct bracket sequence.

Then follow a string of m characters "L", "R" and "D" — a sequence of the operations. Operations are carried out one by one from the first to the last. It is guaranteed that the given operations never move the cursor outside the bracket sequence, as well as the fact that after all operations a bracket sequence will be non-empty.

Print the correct bracket sequence, obtained as a result of applying all operations to the initial sequence.

In the first sample the cursor is initially at position 5. Consider actions of the editor: