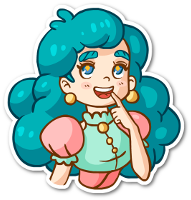 Slastyona and her loyal dog Pushok are playing a meaningless game that is indeed very interesting.

Unfortunately, Slastyona had lost her notepad where the history of all n games was recorded. She managed to recall the final results for each games, though, but all of her memories of them are vague. Help Slastyona verify their correctness, or, to put it another way, for each given pair of scores determine whether it was possible for a game to finish with such result or not.

For each pair of scores, answer "Yes" if it's possible for a game to finish with given score, and "No" otherwise.

The second game needs exactly two rounds to finish with such result: in the first one, Slastyona would have said the number 5, and in the second one, Pushok would have barked the number 3.