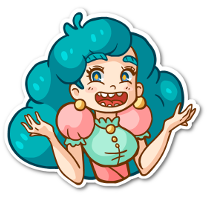 It's the end of July – the time when a festive evening is held at Jelly Castle! Guests from all over the kingdom gather here to discuss new trends in the world of confectionery. Yet some of the things discussed here are not supposed to be disclosed to the general public: the information can cause discord in the kingdom of Sweetland in case it turns out to reach the wrong hands. So it's a necessity to not let any uninvited guests in.

For an entrance to be protected from possible intrusion, a candy guard should be assigned to it. There are k such guards in the castle, so if there are more than k opened doors, one of them is going to be left unguarded! Notice that a guard can't leave his post until the door he is assigned to is closed.

Slastyona had a suspicion that there could be uninvited guests at the evening. She knows the order in which the invited guests entered the castle, and wants you to help her check whether there was a moment when more than k doors were opened.

In the second string, n uppercase English letters s1s2... sn are given, where si is the entrance used by the i-th guest.

Output «YES» if at least one door was unguarded during some time, and «NO» otherwise.

In the second sample case, the door B is opened before the second guest's arrival, but the only guard can't leave the door A unattended, as there is still one more guest that should enter the castle through this door.