By ScarletS, 2 months ago,

Thank you for participating in our contest! We hope you enjoyed it. Implementations will be added soon (when Codeforces lets authors submit solutions!).

Please let us know what you thought of the problems by voting!

Consider the cycles in the permutation. What cycles can there be?

Try separating the even and odd cases.

What do two clocks with assigned values on the same column tell us about their respective rows?

If we are modifying a point already in an interval, how can we grow/split the interval to maintain balance?

By ScarletS, history, 5 months ago,

I've been meaning to write a blog about this somewhat well-known, but not (as far as I know) documented trick for a while. I've decided to call it the Amogus trick after the first problem where I encountered and used it.

First, let's solve an easier version of this problem, where we just need to find whether there exists a configuration of player roles (i.e. Crewmate or Imposter) such that all the statements made by players so far are true.

Let's look at the two different types of statements made by players separately.

Adding edges is easy, we can just use normal DSU. But how do we deal with anti-edges? This is where the Amogus Trick comes in!

Testcases 2 & 3 of the sample input in the problem, respectively, visualised with the Amogus trick: 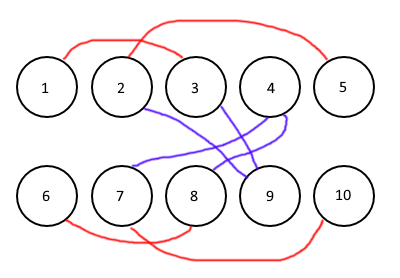 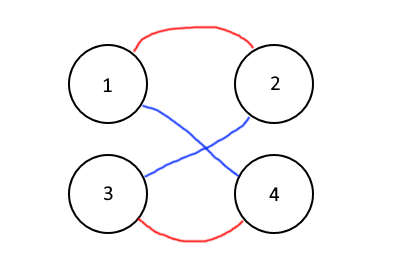 So, how can we solve our reduced problem with this? Note that a player can be exactly one of $$$\{ \text{Crewmate, Imposter} \}$$$, so a configuration is invalid iff for some $$$1 \le i \le n$$$, nodes $$$i$$$ and $$$i + n$$$ are in the same component in our DSU. This is the only condition we need to check, as since the edges we add to our DSU are symmetric, there will always be a valid assignment of roles.

It's not too difficult to extend this idea to solve our original problem.

Using this trick, we can solve a variety of other problems, such as dynamic bipartiteness checking, and it can often be paired with other modifications of DSU such as with support for rollbacks.

Problems are ordered (roughly) in ascending order of difficulty.

A special thank you to kostia244, BucketPotato, fishy15 and AlperenT for providing lots of feedback and/or sample problems!

By ScarletS, history, 10 months ago,

In today's Codeforces round, I realised a minute before the contest that I had forgotten to register. "No problem", I thought to myself, "extra registration open in a few minutes". To try to minimise penalty losses due to my delayed submissions, I decided to start with problem C. Unfortunately, it took me longer to implement than I expected, and by the time I was ready to submit, the extra registration period had ended. Now I am left with nothing to do for the next hour and twenty minutes :(

As the title suggests, I would like to propose that Codeforces keep its extra (late) registration open throughout the contest. Unlike AtCoder, where such a system is problematic due to its penalty system, Codeforces' penalty for submissions increases every minute, and it is no different to registering 2 days before the contest, so it isn't exploitable.

I don't see any reason not to have this, unless it is too much of a technical difficulty due to room allocation?

By ScarletS, 17 months ago,

You will have 2 hours to work on (and solve!) 6 problems. At most one of the problems will be interactive. Make sure to read this blog and familiarize yourself with these types of problems before the round! You are highly encouraged to read all the problems ;).

Good luck, and see you on the scoreboard!

UPD: Editorial is out!

UPD: Congrats to the winners!

We hope you enjoyed the round. See you soon!

By ScarletS, history, 19 months ago,

I'd like to preface this by saying I know that the world doesn't revolve around IOI participants or whatever, this is just a suggestion. There is an upcoming Div. 1 and Div. 2 round (#728) scheduled for the 25th of June 15:35 UTC. I think Div. 1 rounds are pretty rare as it is at the moment, and that most serious IOI competitors practice on Codeforces anyways, so it would be nice if it could be rescheduled to some day that doesn't clash with one of the competition days. That way, it can also serve as a nice practice contest for the IOI :)

E: This topic seems to be supported by many in the Codeforces community (judging from the upvotes), I think it's fair to tag MikeMirzayanov now.

By ScarletS, history, 23 months ago,

Simply check if the condition given in the statement is fulfilled.

Simply simulate the game and print out the winner.

We can represent the gems which can be placed adjacent to each other using a graph. Now, for each $$$C_i$$$, do a breadth-first search of the graph and calculate distances to all other gems. We can now model the solution as one with dynamic programming with bitmasks. Let $$$dp_{i,j}$$$ be our answer if we use all the gems included in the mask of $$$i$$$, ending with gem number $$$j$$$.

We can calculate the number of inversions in the original array in a number of ways, such as with a Fenwick tree or with merge sort. Now, notice that each of the resulting sequences essentially remove the first element of the previous sequence and insert it at the end of it. This removes $$$a_i$$$ inversions and adds $$$N-a_i-1$$$, changing the total number of inversions in the new sequence by $$$N - 1 - 2a_i$$$ for each $$$i$$$ from $$$0$$$ to $$$N-2$$$.

Calculate the sum of the digits of both integers, and print out the maximum.

If, after processing all the input strings, no unsatisfiable string has been found, we print "satisfiable".

This is a classical dynamic programming with bitmasks problem. We can calculate the minimum amount of components possible for some mask $$$m$$$, and iterate over its submasks to reduce this number further. More to be added if there are requests for such.

If Takahashi's phone is to run out of battery during his walks between two of the locations, it will be at an even lesser battery at the end of that walk. So, we simply need to check that upon entering one of the $$$M$$$ cafes, or returning to his house, that his phone's battery is greater than 0, and increase his battery by $$$y_i-x_i$$$ for each of the cafes, while making sure the phone's battery is capped at $$$N$$$.

This is because we can reduce the problem down, respectively, by:

We can use a data structure, such as a Fenwick tree, or segment tree, to process these queries.

My solution (using a Fenwick tree)