Thank you for your participation!

We first sort the array $$$a$$$ in non-decreasing order.

It is also possible to find a configuration of torches in the pyramid such that the brightnesses of the rooms on the $$$i$$$-th floor is exactly $$$i$$$, i.e. it attains the upper bound.

One operation should be used to remove every element not belonging to $$$T$$$.

Let's call a group of slime good if their total health is at least $$$0$$$, or if defeating this group allows you to reach the exits.

We partition the slimes into good groups in a two-pointer like manner. To form the groups to the right, start from position $$$k$$$, then find the smallest position $$$r$$$ such that slimes from $$$k+1$$$ through $$$r$$$ form a good group. We do the same starting from $$$r+1$$$ again. Repeat this process until slimes to the right are partitioned into groups, which can be done by maintaining the sum of health. We partition the left slimes into groups in a similar way.

We can observe that in an optimal strategy, we may assume the player absorbs group-by-group.

Consider instead the strategy where we move all `L' to the front. We claim that the strategy stays valid. That is, the following strategy

We check that at every moment of strategy $$$LLLLLLRRRR....$$$, there is some point in time $$$LLRRLRLLRL....$$$ which we would have less than or equal amount of health.

By applying this claim recursively, we notice that we only need to consider strategies that absorb whole groups at a time.

For any good group, since the total health is positive, there is no drawback to absorbing a good group. In other words, whenever it is possible to absorb a good group, we will absorb it.

For each group $$$G$$$, we calculate the ``requirement'' of the group — the lowest health we can begin with, such that we can absorb the group while maintaining non-negative health at all times. The requirement of a group of slime with health $$$a_1,a_2 \cdots a_n$$$ can be expressed as

Finally, we can simply simulate the process. We repeatedly attempt to absorb good groups to the left or to the right. We keep track of the current health, initially equal to $$$a_k$$$. Whenever we consider whether to absorb a group or not, we absorb it if and only if the current health is at least as high as its requirement. Otherwise, we ignore it for now and attempt to do so for the group on the other side. If it is possible to reach a state where either all left groups or all right groups are absorbed, then we can win the game. If at some point, it is not possible to absorb the left group nor the right group, then we lose.

We say a matrix to be good if it satisfies the congruence condition (the second condition).

When we have a good matrix, we can add any value $$$c$$$ to a whole row while maintaining the congruence relation. The same is true for adding the same value to a whole column.

In fact, there are a lot of possible constructions. We present a few of them here:

As a bonus, we prove that the general quadratic polynomial gives a good construction.

Here are some extra observations that may enable one to find a good matrix more quickly.

Observe that the $$$i$$$-th character is `1' if and only if $$$i$$$ has an odd number of set bits in its binary representation. Both solutions make use of this fact.

We can thus conclude the following: the number of trailing zeros is all we need to decide the answer.

There are many other digit DP approaches that give similar time complexity. The constraints should allow most of them pass.

We have thus reworded the statement into evaluating the follow expression:

The formula can be further transformed as:

We are therefore motivated to proceed in the following way: if we drop the least significant bit (by making it to be $$$0$$$), we are still solving a very similar problem to the original problem, because dropping the first bit is similar to removing $$$C_0$$$. And when we shift $$$C_i$$$ to $$$C_{i - 1}$$$, it is a recursion of the same problem!

From here we have everything we need to compute the result of the original problem.

UPD: The round has been rescheduled to a different time due to a clash with a CodeChef contest

We would like to take this opportunity to thank everyone who have contributed to our round:

We look forward to seeing you on the leaderboard!

Problem by tag is not sorted by problem number

Here is page 10 of constructive algorithms retrieved as I wrote this. Link Filter by Constructive Algorithim 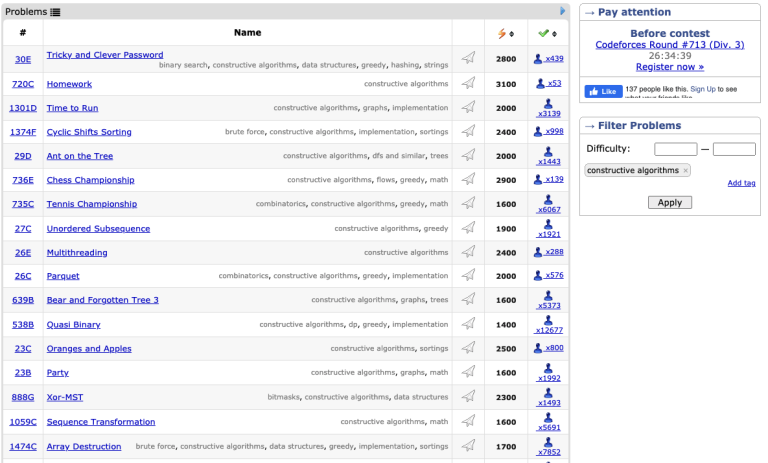 Not all tags are affected. For example, the divide and conquer tag is sorted. This is also how I expect it to work. 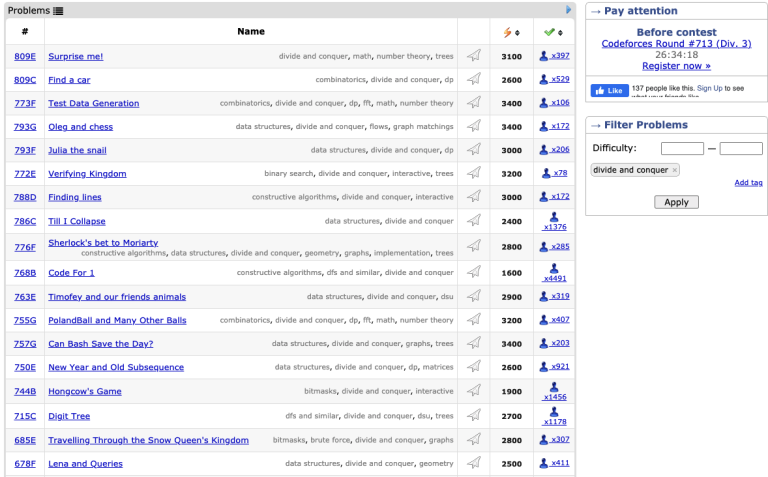 This is an important feature: I plan to do only early problems with tags shown and save recent problems for virtual contests.

EDIT: I got so annoyed by this that I just wrote my script and use codeforces API instead... Script

Hi! I am relatively new to competitive programming , taken parts in GCJ for 2 years (with Swift). I am certainly new to CodeForces.

In view of this, I wish to make a feature request about if it is possible to include Swift (Swift 5.1 by Apple) as a language for codeForces.

I will go through some reasons why it is very reasonable to use Swift for CP.

1) Main Reason: It is a Developed modern language that is decently popular

Swift is a modern language, that has been out since 2014. Basic Object oriented, try/catch features exists. Swift also does a lot of modern features quite well: First class functions, Generics, strong inferred typing.

Swift is consistently within the top 10 most popular language, whichever source I find.

Unlike the the Apple predecessor Objective-C , which is very archaic and clunky in its syntax. The whole Swift is built from ground up keeping clean syntax in mind. Clean syntax is one of the promise of the Swift language. A few things that worth mentioning:

And some very versatile features that is helpful for large projects, but are conceivable to develop a CP framework out of: Generics, and Protocol with associated types And latest features in Swift 5: Functional builder and property wrappers

Certainly some of these features will be present in some other languages. I don't know about all languages, I am only certain these are not in Python, for example.

The point is not that all these can be reasonably applied in CP, rather, that this set of tools is adapted to some CP tasks, so this option should exist.

3) The language isn't slow, it is still a statically typed compiled language after all.

4) Also , not a good reason by itself but still worth mentioning: Google Code Jam has Swift as an option.

I will admit, I like using Swift because I come from industry programming, and a large portion of popularity is due to it being the native language for Apple developments. However, I firmly believe that as explained above, it is a very serious language that is competitively viable.

Therefore, I wholeheartedly wish that I can use Swift for CodeForces. I hope this can be considered seriously.