By adamant, history, 7 months ago,

There is a concept that is sometimes mentioned here and there. The Lagrange inversion theorem.

The Lagrange inversion theorem gives an explicit formula for the coefficients of $$$g(x)$$$ as a formal power series over $$$\mathbb K$$$:

Finally, to avoid division by $$$k$$$ one may use (see the comment by Elegia) the following formula:

Familiarity with the following:

It is required to have knowledge in the following:

I mention the concept of fields, but you're not required to know them to understand the article. If you're not familiar with the notion of fields, assume that we're working in real numbers, that is, $$$\mathbb K = \mathbb R$$$.

It is recommended (but not required) to be familiar with combinatorial species, as they provide lots of intuition to how the equations on generating functions below are constructed.

In my practice, most obvious use cases of the inversion theorem are related to the enumeration of trees.

An ordered tree is a rooted tree in which an ordering of children is specified for each vertex. 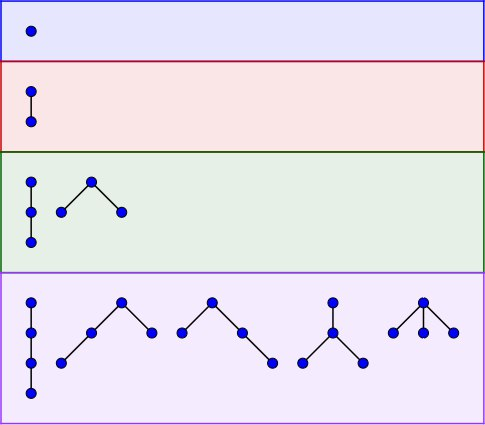 Ordered tree can be described recursively in the following manner:

In other words, as a set-theoretic object, an ordered tree can be represented as a $$$(k+1)$$$-tuple, such that the first element is its root and the next $$$k$$$ elements are its subtrees, which are also objects of the ordered tree class.

We can enumerate ordered $$$n$$$-tuples of arbitrary objects from class $$$A$$$ as $$$A^n(x)$$$. And to enumerate them for every $$$n \geq k$$$, we would need to sum up the functions, obtaining the generating function for the ordered sets of ordered trees:

Let $$$T(x)$$$ be the generating function of ordered trees. Then it might be represented as

Alternate approach is to express $$$x=f(T)$$$. Then the Lagrange inversion theorem would still allow us to compute coefficients.

Another task of interest is to enumerate the $$$k$$$-ary trees.

The later follows from the exponential formula which states that the generating function for the class of sets of $$$T$$$ is $$$e^{T(x)}$$$.

Note that this equation only works for labeled trees, and their exponential generating function:

As it stands with generating functions, we're more interested in finding some expression for $$$g(x)$$$ as a formal power series, rather than closed elementary form (which may not exist). In doing so, we may use the Lagrange inversion theorem.

$$$x^{-n}$$$ in the formulas above expects negative power of $$$x$$$ and $$$f^{-k}$$$ expects the existence of the multiplicative inverse for arbitrary formal power series $$$f(x)$$$, which is problematic. To mitigate this, we expand the domain of functions we're working with to formal Laurent series.

In other words, formal Laurent series is a formal power series, which is also allowed to have finitely many terms $$$x^k$$$ with $$$k < 0$$$.

Now that the formula is properly formulated, you may find the detailed proof below:

This value is of great interest due to the following properties:

Proof of the theorem

Note. Using the same reasoning, we can deduce it in even more general form for any analytic function $$$h(x)$$$:

Quite often the equation that you deal with in combinatorics is formulated as $$$y = x \phi(y)$$$.

It is possible to get a simpler expression for such cases.

It is especially convenient due to the fact that we don't need to actually deal with Laurent series.

More general result for this case is known as the Lagrange–Bürmann formula:

Cracking up the examples

we may rewrite it as

Further $$$k$$$ are seemingly not present on OEIS.

From this follows that

Note that we were specifically considering the exponential generating functions, thus the actual number of trees is $$$n! [x^n] T(x) = n^{n-1}$$$.