The Brazilian IOI 2023 Team was selected and it is stacked

By defnotmee, history, 2 months ago,

Because of weird scheduling issues, the brazilian TST is normally made at december of the year before IOI, different from the rest of the countries. So, today was the last day of TST and after 4 days of contests we have our team settled: 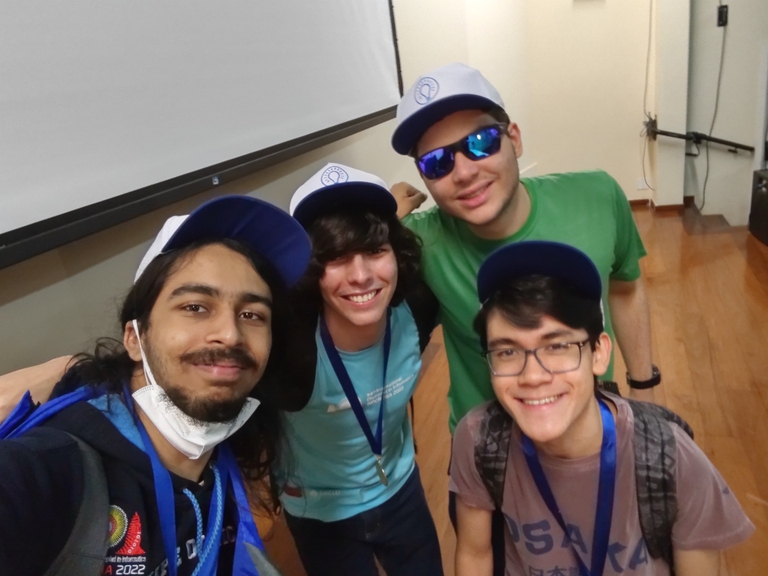 From left to right, we have:

In case youre curious, here is a screenshot of the scoreboard so you can see how everyone went.

We were quite comfortably above 5th place in the end, but i had a headache on the first day so i wasn't even top 4 on it. The problems were also really good, as they typically are (even though i can't say the same about the test cases :P).

This team is particularly strong (for Brazil at least) and I'm pretty happy about it.

All I can say about myself is that I was in IOI 2022 and got 57th (silver medal). I took a bit of a break from cp since i came back from Indonesia, but now with school ending I'll have basically infinite time to practice cp.

Heuristics monster. Notably, in a training camp, he passed a problem no one else did with simulated annealing (or as he calls it, "the forge"). He also went to IOI with me, and we got the best placings out of the brazilians on it.

He's a second year high schooler that is coming on strong, surprising everyone by AKing 2 out of the 4 days of the TST. Honestly the one i know the least out of the 4, so I don't know their full potential. Despite that, he's definitely someone to look out for. Also note that he can also go to IOI 2024.

Perhaps the most interesting out of the 4. He is in 9th grade, so in addition to IOI 2023, he can go to IOI 2024, 2025 and 2026. He's from the same school as me, so I've known him for a while. Last TST he got 11th place, getting just outside of the range to go to CIIC (the iberoamerican competition), but he did a lot of training since that and got into the IOI team.

He also lost his phone in every TST he has been in, definitely a feat to beat.

Brazil is starting to get some really solid teams with some really talented people, and with so much time to train, I think we can do well in hungary.

EDIT: forgot to add earlier, but here is a follow-up blog