Everything in this blog is only my opinion, motivated by the recent round. If you disagree with it, let's discuss in the comments!

It's always hard to prepare a balanced problem set, and when the contest turns out to be unbalanced, an army of angry coders will destroy you in the comments section. But how can setters make Codeforces contests balanced?

Before, authors usually had to spend more time coming up with new problems which would close a too large gap between some $$$2$$$ problems. But now we have an easier solution! Any time there is a big difficulty gap in a contest, add subtasks to it!

View on subtasks by MikeMirzayanov:

Subtasks became really widely used in Codeforces contests recently. I looked at last $$$30$$$ contests rated for Div1 users. In turns out that:

Codeforces rounds in the nearest future: 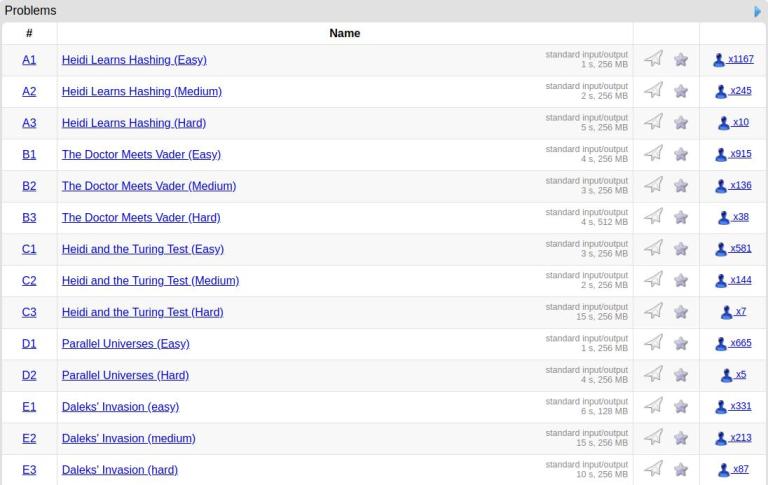 But what can be bad about subtasks if they are making contests so balanced? I have several thoughts.

To begin with, subtasks shouldn't be treated as a panacea. That means, that we can't create a random set of problems with hope to make it balanced by adding several subtasks: they should be treated as a safety bag. As MikeMirzayanov says, In a perfect world, probably, subtasks are not needed

Setter has to really aim to make a balanced round, and after that, if testing shows that there is some very large gap, then maybe try to close it with a subtask. This means that subtasks should be pretty rare in general. However, we see that the number of subtasks in Codeforces contests is growing. Did setters really become worse in making the rounds balanced during the last year? I don't think so, and, to be honest, it feels like the trend now is "Oh it's not balanced, don't bother, just add subtask". The earlier the round is ready the better!

Now the actual complaints about the subtasks on Codeforces:

1. The difficulties are almost always ruined.

And an example that really a lot of people were angry about:

2. The strategy of solving the easy subtask before trying hard gives more points than just solving hard from scratch too often.

As pointed out by teja349 here, this would have been okay if the penalty was last submission time, but the decreasing problem value Codeforces system makes the situation with subtasks really sad. Basically, this gives a motivation to solve all easy problems first and doesn't give you nor motivation either time left to work on the harder version.

3. The subtasks should have some weight as problems even on their own, but often they are dead problems.

I will explain what I mean. Consider problem B1 from Codeforces Round #602(Div 1). I am sorry, but there is just nothing good about this problem. It's clear that it was created just for balance, and it's clear that no author with some self-respect would come up with exactly this problem, it's suitable only as a subtask. But as a result, we get a Frankenstein problem.

E1 from Codeforces Round #577(Div 2) — I really like E2 version, but E1 just makes you code all the possible positions on the board, and I don't think that there exists a person that would find that beautiful.

However, I don't feel that subtasks have been really successful in Codeforces (yet). Setting a good subtask doesn't require much less effort than coming up with a new problem, and should be treated with the same amount of responsibility, but it seems that's not true here (yet).

What do you think?