On setting D2A and D2B problems

Disclaimer: as always, everything in this blog is just my opinion.

Some problemsetters don't take easy problems seriously. One very popular opinion is that the D2A-B problems are just stupid implementation exercises intended for beginners to learn how to code. 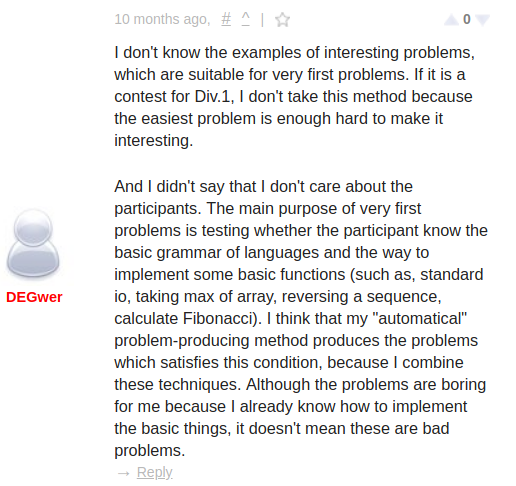 It's true that D2A-B problems are mostly like this on most platforms. This is one of the reasons why a lot of people don't like combined rounds: they think that solving D2A-B problems can't be interesting and just takes time which could be spent on solving fascinating problems of higher level. From point of view of most participants, easy problems just can't be good, because if problem requires some thinking than it's not easy enough for D2A-B level. Easy problems can't be interesting, they say!

This situation really upsets me. This kind of attitude from the community leads a lot of problemsetters to care about easy problems even less. At the same time, I am sure that easy problems can and should have nice ideas in them. Yes, even D2A-B level problems can need some observation/insight!

I will start with some examples of D2B level problems which I consider really nice. I recommend trying them! Some comments are under spoilers.

This problem is easy enough for D2B, it had $$$8679$$$ solves from official participants during the contest. However, it still requires an observation: length of the LIS is equal to the number of distinct elements.

Again, easy enough, but you still need an observation: if there exists some interesting segment, there exists one of length exactly $$$2$$$.

A few more nice D2Bs where you have to think a bit:

You may be surprised, but even D2As can have nice ideas in them! Here are some examples:

There are A LOT of possible constructions, so it's hard to get stuck on this problem, but you still have to be creative.

Observation: everything works out if you sort arrays. Cute, simple, extremely easy to implement.

Again, there are a lot of approaches to this problem, but you still have to think to find them.

There are a lot of ways to solve this problem, but you can solve it with a cute observation: if it's even possible to reorder the array, then sorting the array will satisfy the condition!

I hope you found these problems nice. All of them require at least some insight/observation, and they are still easy enough for beginners and for D2A level. All of them have quite a short and clear statement, and you don't have to waste a few minutes understanding the problem's statement.

However, first problems in rounds aren't usually like this. Very often the first problems are just: Do what's written in the statement, or Bruteforce all possibilities to find the answer. Majority of D2A-Bs don't have any idea at all. Here are some "best" examples:

At this point a lot of readers may disagree with me. Some people may say:

And they would be right to some extent. However,

After all, the first problems are the ones that the largest number of participants will try to solve, and half of the participants won't even get past D2B. How can we not care about D2A and D2B then?

Yes, setting nice D2A and D2B which require some ideas and are still easy enough is hard. Really hard. But setting good problems is hard in general. If you decided to spend some time to make a good round you should spend some time and try to make all problems good. I believe that D2A and D2B level problems shouldn't be created like this:

I have to note that the situation now is much better than it was a few years ago, and that the quality of all problems, even of D2A-B has improved a lot since then. But I still hope that after reading this blog some of you will spend more time thinking on D2A-D2B problems before submitting contest proposal on CF :P From my side as a coordinator, I try to not let boring problems get into CF rounds, and I hope to become better at this in the future.

What are your thoughts? Should authors spend more time coming up with nice easy problems, or is it just a waste of time?