Special thanks to Sexpert for helping me proof-reading this blog :D

Hi everyone! Some years ago I read zscoder's tutorial on slope trick. Initially, I found the blog a bit difficult to understand, so I came up with a different explanation and system for my personal use. Today, I finally have the courage to share it with you guys. So without further ado, let's get started!

Slope trick is a way to represent a function. Here, I denote that a function is slope-trick-able (sorry for the lack of creativity) if the function satisfies 3 conditions:

Now we are done with all the definitions, let's get this new knowledge to work! As we will see in the next few examples, the essence of slope trick lies in the flexibility of transforming our functions just from modifying the slope changing points and the rightmost function.

TL;DR: You are given an array, each operation you are allowed to increase or decrease an element's value by $$$1$$$. Find the minimum number of operations to make the array strictly increasing.

We first need to transform this problem a bit by changing the condition from strictly increasing to non-decreasing. To do that, simply do a[i] -= i for all elements. 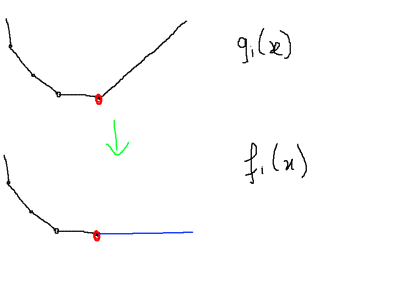 Therefore, we can continously maintain $$$f_i(x)$$$ with increasing $$$i$$$, using a priority_queue as the data structure backing our slope changing multiset, and simply output $$$f_n(\infty)$$$ as our answer. The complexity is $$$O(n \log n)$$$.

We first observe that the restriction to keep all elements non-negative is unnecessary, because in an optimal construction, we would never have a negative element in the array (we can simply make the negative elements equal to $$$0$$$ to use less operations and still satisfy the condition). 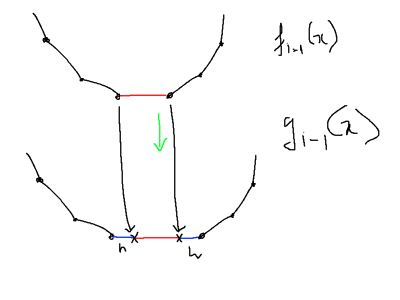 A sidenote when implementing, we can use 2 priority_queue's to maintain the slope changing points of our left and right part, and rather than maintaining the rightmost function, we can maintain the function of the minimum section itself. Complexity is $$$O(n \log n)$$$.