Let’s start with previewing some teams that will participate in World Finals. I will write about 6 teams that I believe are favorites to win gold medals, but anything can happen. Feel free to post your top 6 (top 3, top 12, top n) in comments. 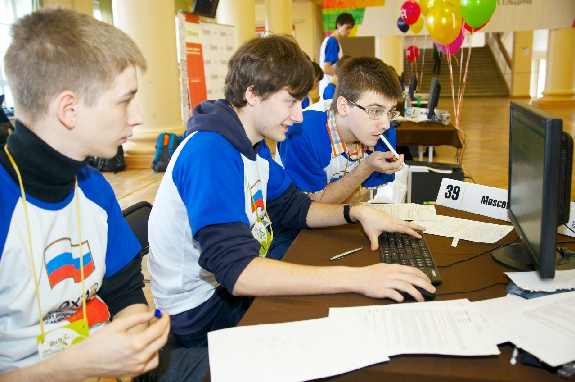 First to go is Moscow State University team ST. It's name has become a brand that has a very long history. My own team, Moscow SU x13, competed against a team with the same name. It usually consist of Moscow SU students that are originally from Saratov.

This is the second time this lineup participate in World Finals. Last year they were 10th and won bronze medals. With last minute (more like last 5 seconds) submission they got 2nd place in last NEERC, which is repeat of 2011 performance. They won last Moscow subregionals.

In last 6 seasons of OpenCup they placed 7th, 8th, 5th, 6th, 4th and 4th in general classification, 2 second places as well as 6 third places on separate stages as well as third place in finals of 11th OpenCup.

Very solid team and individual achievements would put this team in list of favorites in any programming competition. I’m absolutely sure they would win medal and their chances for gold are at least 50%. What do you think about Moscow SU ST?