By NXIST_buster, history, 16 months ago,

This blog is about Corruption and Cheating at ICPC YinchuanRegional. ICPC Yinchuan Regional is one of the ICPC regional contests for students competing in the geographic area of Asia East Continent.

Ningxia Institute of Science of Technology, or NXIST is a higher education institute in China. Since 2019, NXIST has held two regional contests. The and both were considered by many participants as jokes, yet until today participants are unaware of the NXIST's extent of evil.

Zhihu is a Chinese website similar to Quora, and I will refer to this website for information.

Regional competitions in China consists of two stages: The online selection contest and the onsite regional contest. As there are many contestants in China, the online contest is considered serious and rules are usually strictly enforced, with entire universities where some participant cheats disqualified from attending the onsite regional.

In 2018, NXIST claimed that whoever attends their invitational competition can attend regional contests directly, leading to angry discussions https://www.zhihu.com/question/276204455.

The original information sent to the participants is as follows:

While with great relief the claimed free onsite spot was never realized, in the online qulifier for Yinchuan Regional Contest held by NXIST in 2019, NXIST used exactly the same problems as the 2018 NXIST invitational competition. Leading to countless participants cheating and teams solving (actually copying code of) all problems in under 5 minutes.

After this happens, the online qualifier round was generally condemned by contestants, with more than 220 answers to discuss this in zhihu: https://www.zhihu.com/question/343590565.

After wild condemnations, NXIST attempted to hold another online qualifier where the Online Judge failed during the contest and the qualifier was again announced to be effectless and null.

Dr. C J Hwang, ACM-ICPC Asia Director later ordered NXIST to allow all universities interested in the onsite contest to be given free spots, making Yinchuan regional the largest regional of over 400 teams. With most strong teams unwilling to go to the "Joke" regional, weak teams advanced to WF and regional gold medals were send to much weaker teams than usual, leading to general dismay.

NXIST again hold an regional in May, 2021 with no qualifier round, leading to 499 teams attending onsite. This time NXIST sent 14 teams as official participant to their own regional, where in tradition universities in China almost never send own teams as official teams, not to say more than 10 teams.

While sending many teams may be somehow "acceptable", the teams sent by NXIST were spotted using three laptops per team to compete during the official onsite regional while all other teams used only one computer assigned by NXIST.

See proof in the following images (Codeforce version suffers low resolution, but you can find original ones on Zhihu if you want): 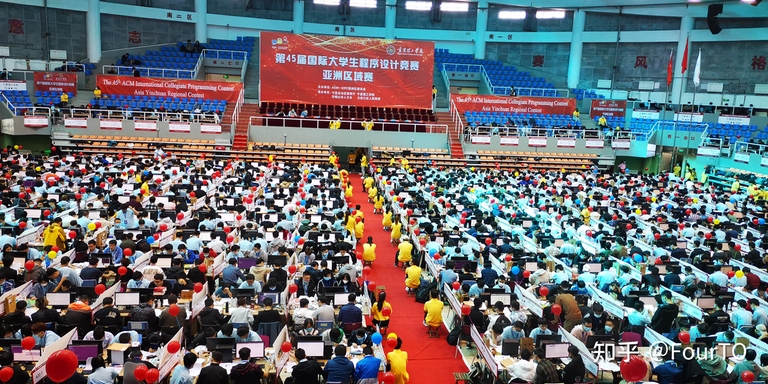 This is an image taken during the official contest by a spectator. Nothing quite wrong, right?

Well, No. When we zoom in to the upper right area, what do we see:

We see NXIST(宁夏理工学院) teams using their own laptops to compete. You may see stars on their team name, yet NXIST later said that the stars were "Just For Fun" and these teams are official. These teams were later awarded medals from the contest.

While this is already completly mind-blowing cheating to most contestants, clues of a much worse degree is only announced today.

Yonghui Wu announced today in a Wechat group of 499 people:

This is mindblowing cheating, as DomJudge users will know that it is only possible to view somebody else's code via the Jury interface with a Jury or Admin account. It is logical result that very likely, some NXIST personnel helped teams (Which used there own laptops) acquire the submitted code of another team.

This could not be a printed code leak because even with the printed code it is impossible to type "char by char" same, moreover teams never print Accepted code.

I know that maybe things isn't getting better after all these years of NXIST making fun of ICPC, but I believe cheating and corruption of such degree calls for words to be spread.

Let's hope for things to get better.