CP is about solving problems fast. And as absurd as it may sound, I believe that SOLVE and FAST are very different and almost independent parts, and you need to practice them separately.

Let’s look at some contest, like a CodeForces round. For the sake of simplicity let’s assume that every problem has some difficulty, which is a numerical value denoting how hard it is, bigger values correspond to harder problems (it is not true, but it is an ok-ish approximation, at least if we consider subjective difficulty for a fixed person). Contests are made for a wide range of participants, and problemsetters strive to make contests interesting for a wide range of participants, which means having a smooth difficulty gradient. Well... as smooth as it is possible with 5-6 problems. 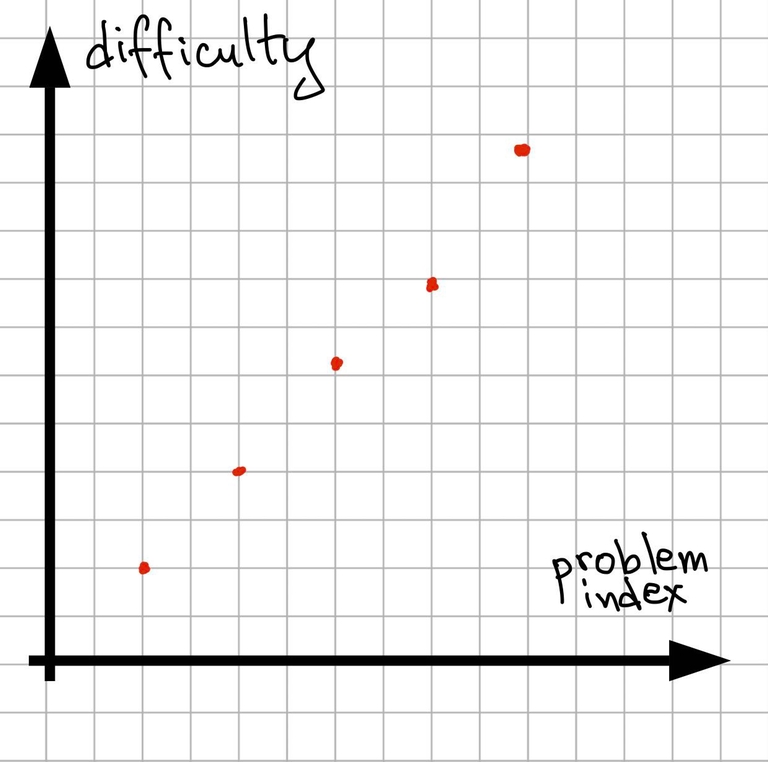 On the moment of a contest you have some ability to solve problems. If we assign each problem with numeric difficulty, it is reasonable to say that your problem solving ability is also a number on the same scale. But it doesn’t mean that you can solve all the problems below your level and can’t solve anything above your level... it’s more like “probability distribution”, or maybe how much time you need to solve the problem of given difficulty:

The issue is this probability distribution is something close to sigmoid: You can surely solve the problems that are much lower than your level and you solve them almost instantly after reading; on the other hand, you need too much time, maybe even infinite time, to solve problems way above your level. And that interval of difficulties which is not too easy while not too hard for you is rather small. Let’s call this interval interesting.

Since one contest has only a few problems and should cover a wide range of difficulties, there is usually one problem in your interesting interval, rarely there are two, sometimes there are none. These are the situations to which some participants refer to as speedforces: your result in the contest depends on how fast you solve easy problems. I don’t want to disappoint you, but almost every contest is a speedforces contest in a sense that your result is mostly determined by your speed and accuracy on easy for you problems or, how I call them, problems that you already know how to solve. In a contest, you don’t have time to come up with something completely new and original. Yes, you need to get what is the problem about, unravel some layers of reductions and implement the solution, but in a nutshell you know how to do every small part of the problems you will solve in the contest before the contest even starts.

To learn how to solve problems you need to solve problems, solve problems that you don’t yet know how to solve, but that are possible for you to come up with, maybe using a lot of time. These are the problems from the interesting interval, slightly above (or below in some cases) your current level, but not too much above because otherwise you can’t solve them yet. So we need to somehow find a lot of problems near your level, how to do that? The answer is rather simple: go to a place that has a lot of problems of various difficulties and doesn’t have a time limit. It is not a contest, it is an archive. 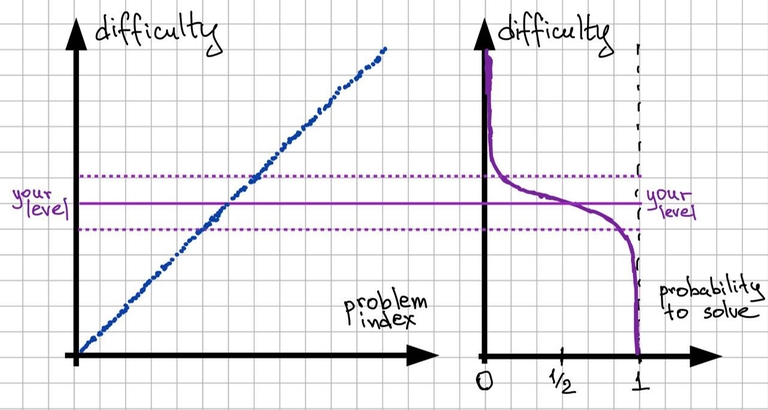 I notice that nowadays many people start from CodeForces contests, and I think it is bad and it is the underlying reason for many frustrations. Some things that come to my mind:

The questions that I anticipate (ask your questions in the comments if needed):

Q: How long do I try to solve the problem in the archive before reading the editorial? Like, 30 minutes?
A: You don’t read the editorial. The best option is to choose an archive that doesn’t have editorials at all, so you don’t have to fight the urge to look at the solution.

Q: Ugh, and what should I do if I can’t solve the problem?
A: Abandon it, for now, switch to a different problem, return to it after a month or so. My usual approach was to open 10-15 problems, read them carefully, think a bit, choose the one I want to try and solve now, try for some time. If I don’t feel like I’m getting anywhere, switch to another problem.

Q: Month?!
A: Maybe even more. You need time to acquire new skills and discover new ways to look at this problem (by solving other problems). It doesn’t make sense to return in less than a month because you will only run through the same ideas you did before.

Q: Ok, but how do I learn new techniques if I don’t read editorials? I’m not supposed to invent everything on my own, am I?
A: Most of the time you don’t need to learn any advanced stuff to solve the problem, you can’t solve it because you are not trying hard enough or not paying attention to details or just being stupid. My experience even says that most Russian schoolchildren who do CP know too many algorithms.

Q: But there are problems that require some standard things!
A: OK, yes. The best option, in my opinion, is to have some person around who solves the same archive and is better than you. In case you are stuck on a problem for a long time (that’s not an hour, that’s several months) you should ask them “Do I have to know some standard technique to solve this?” Pay attention: not ask how to solve, or for a hint, just a yes/no question. Most of the time the answer will be “No”. In the case of a positive answer, they will be able to send you a link to an article or what to google to learn about the technique. After that, you still will have to apply this technique to the problem, and you are more likely to actually remember how to use it and why did you need it in the first place, which tremendously increases your chances to use it successfully in the future.

Q: OK, which archive should I use?
A: It is not that important, but you should use one and stick to it. I have used Timus because I’m from Ural region, there are numerous others: UVa, SPOJ, Codeforces archive (has editorials and too many problems, thus a warning) etc.

Acknowledging this and separating learning how to solve from contests can lead to better training, I believe.

How to split the time between archives and contests? Well, contests are held in some fixed time, so when there is a contest that fits into your schedule, you shouldn’t miss it. Turn to archive when you want to practice and solve something which should be often, otherwise CP is probably not for you.