The maps in the game are divided into square cells called Geo Panels. Some of these panels are painted. We shall assume that the Geo Panels without color are painted the transparent color.

Besides, the map has so-called Geo Symbols. They look like pyramids of different colors (including Geo Symbols of the transparent color). Each Geo Symbol is located on one Geo Panel, and each Geo Panel may contain no more than one Geo Symbol.

Geo Symbols can be eliminated. To understand better what happens when a Geo Symbol is eliminated, let us introduce some queue to which we will put the recently eliminated Geo Symbols.

Let's put at the head of the queue a Geo Symbol that was eliminated just now. Next, we will repeat the following operation: 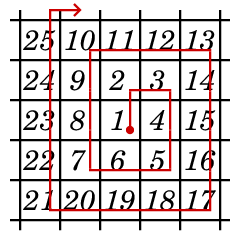 In other words, we select all the panels that need to be repainted and find their numbers in the infinite spiral whose center is placed in the position of the given Geo Symbol. After that, we repaint them in the order of the number's increasing.

If a panel contains another Geo Symbol and this panel is being repainted, then the Geo Symbol is removed from the field and placed at the tail of the queue.

Then follow n line; each of them contains m numbers — the Geo Panels' colors.

All colors are integers from 0 to 109. 0 represents the transparent color.

Print the single number — the total number of repaintings after the Geo Symbol is eliminated.

Please, do not use the %lld specificator to read or write 64-bit integers in C++. It is preferred to use the cout stream (you may also use the %I64d specificator).

All actions of the sample you can see on the following picture: 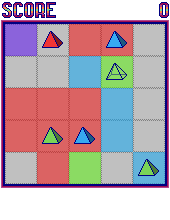 If your browser does not support APNG and you see just static image, you can see GIF version of this image by the following link: